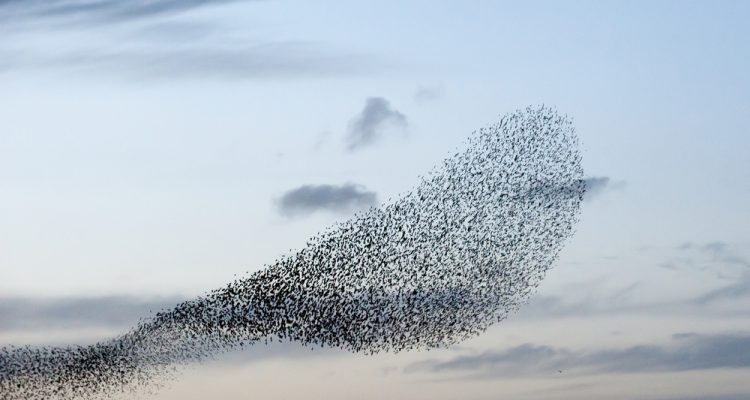 In the video, thousands of starlings fly together, creating loops and whorls in what looks like a mesmerizing aerial ballet. The magnificent mass of birds separates, each part pirouetting around the other, then comes back together again.

The 30-second video, captured by amateur photographer Marco Campazas over Logrono City in Spain, shows the acrobatic masterpiece of flight known as a murmuration.

“I was driving my car and through the window noticed the birds,” Campasaz told SWNS, the independent news site that published his video. “I stopped straight away and filmed them. … I managed to capture the end of their display before they all landed and went to sleep for the evening.”

Starlings are small birds native to Europe, Asia, Africa, and parts of Australia. They’ve also been winging their way across North America ever since they were imported by a Shakespeare fanatic in New York in 1890. The fan wanted to introduce every bird mentioned by the Bard to the continent.

Wherever they are in the world, starlings are known for their massive flocks, including the incredible acrobatics they perform before settling down to sleep many evenings.

According to scientists, the displays – and the massive flocks generally – have both social and practical purposes: