The tiny arms of the T. Rex were more useful than previously thought • Earth.com 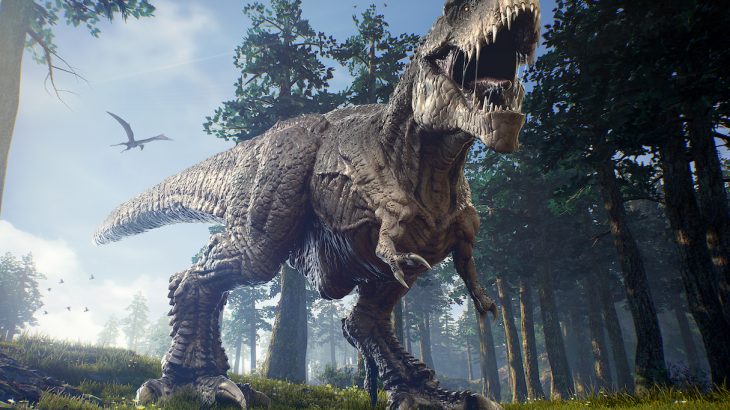 The tiny arms of the T. Rex were more useful than previously thought

A new study from experts at Stockton University has found that the small limbs of Tyrannosaurus rex and other theropods were much more useful than previously realized. The researchers analyzed the arm movement of the American alligator and the domestic turkey – distant relatives of T. rex – and discovered that theropods likely had the advantage of extremely flexible limbs.

Study co-researchers Christopher Langel and Matthew Bonnan told Live Science that meat-eating dinosaurs “may have been able to rotate the palm of the hand inward and upward in such a way that the palm would face the chest when the elbow was flexed.”

The specific advantages of this flexibility are unclear, but the researchers said that it may have allowed for theropods to bring their prey in closer.

“We might speculate that such a movement (rotating the forearm and hand in toward the chest) could allow some theropods to bring prey in close for a bite,” the experts told Live Science.

The researchers cannot study the actual arm of a T. rex due to the fact that soft joint tissues rarely fossilize. “As a consequence, we are missing information on what the shapes of the (theropod) joints actually looked like and how far apart the bones were when the predatory dinosaur was alive,” said the researchers.

Instead, the study was focused on the wings and arms of alligator and turkeys, using a technique called X-ray Reconstruction of Moving Morphology (XROMM). The results revealed that turkey and alligator elbows are quite complex.

“It was especially surprising to see how much the forearm bones could rock side to side at the elbow, a movement that is essentially off limits to mammals like us,” Langel and Bonnan said to Live Science.

“In essence, alligators and turkeys can turn the palm of the hand inward and upward like we do, but by using more-complex movements of the bones at the elbow. Once again, Mother Nature has solved the same problem in different ways.”

The research was presented at the 78th annual Society of Vertebrate Paleontology meeting.