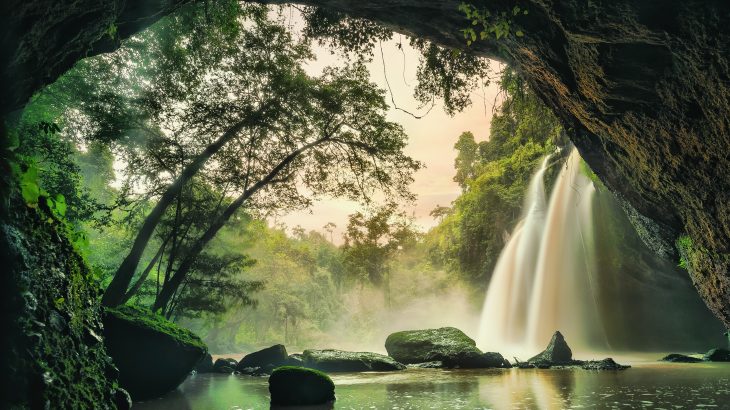 Tropical plant has a single leaf with unlimited growth potential

In Southeast Asia, bizarre plants grow along the walls of tropical caves that have only a single leaf. Scientists at the University of Tokyo believe that a better understanding of this unique species could help lead to the development of genetic tools to control the size of common crop plants.

Monophyllaea glabra, which means “hairless species of one-leaf plant,” sprouts from a seed that contains two embryonic leaves called cotyledons. However, only one of these cotyledons becomes a leaf.

From what has been observed, it appears that this leaf can continue growing larger as long as the plant lives. By contrast, most plants have unlimited leaves with a limited size.

Study lead author Professor Hirokazu Tsukaya first attempted to analyze Monophyllaea nearly three decades ago after observing the plants in their native habitat in Thailand. At that time, genetic tools were designed to examine more common plant species, which made it challenging to study irregular species like Monophyllaea.

Recently, when graduate student Ayaka Kinoshita joined the lab, Professor Tsukaya’s research finally resumed. To investigate why Monophyllaea has only one leaf, the team needed tools that could identify the location and activity level of genes early in the plant’s development.

A technique known as whole-mount in situ hybridization allows researchers to determine all of the genetic material that cells were using at the time of their death. The technique is primarily used to analyze animal tissue, however, and is complicated to use in plants due to their stiff outer cell wall.

“Luckily, another of our lab members, Assistant Professor Hiroyuki Koga, is a true professional at using the whole-mount system and he persisted to develop a suitable method for plants,” said Professor Tsukaya.

“With our naked eye, we cannot see any shoot meristem in Monophyllaea. So we want to know, is it lost or is it modified?” said Professor Tsukaya.

The study revealed that Monophyllaea does not separate the location and timing of STM and AN3 gene expression, but rather overlaps the expression of these two genes.

The researchers explained that what looks like a simple leaf in Monophyllaea is actually a combination or fusing of the shoot meristem and leaf.

“In Monophyllaea, the expression areas overlap, suggesting this plant is a hybrid of a normal leaf and shoot meristem. We suppose this curious gene expression pattern is one reason why the plant has such a curious appearance,” said Professor Tsukaya.

According to the experts, understanding how unusual species like M. glabra evolved to use common genes in uncommon ways will help agricultural scientists develop tools for controlling the size of leaves for optimal crop cultivation in the future.

“We study M. glabra because the characteristics of Monophyllaea development are very unique and they cannot be found in any mutants of common laboratory plants. Dealing with the unique phenomenon can definitely provide new insights to plant science,” said Professor Tsukaya.