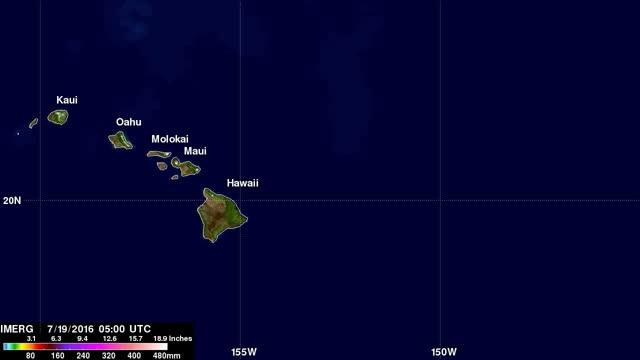 [ooyala code=”44cXl5NDE6IFNO01LHnnEf6aOqFyNIpO” player_id=”ce75157bc770441eaf5e849ae4d1d21f” auto=”true” width=”896″ height=”504″ autoplay=”true”]
Most of the Hawaiian Islands were spared serious damage from Tropical Storm Darby. NASA estimated the rainfall left behind from the storm and found more than a foot and half fell north of Oahu.

The location of Darby’s track through the Hawaiian Islands resulted in the islands of Hawaii and Oahu being the most affected. Flash flooding was common on Oahu due to a reported 177.8 mm (7 inches) of rain drenching the island. Interstate H-1 was flooded in some locations. Lightning damage was reported in Kaneohe on the windward side of Oahu.

The IMERG rainfall accumulation totals were calculated for the period from July 19 through 26, 2016 at NASA’s Goddard Space Flight Center in Greenbelt, Maryland. Darby had weakened from a category one hurricane to a tropical storm before moving into the Central Pacific. IMERG estimates indicate that Darby dropped extremely heavy rainfall at times. The greatest rainfall total estimates during this period were located north of Oahu where 480 mm (18.9 inches) fell.

IMERG creates a merged precipitation product from the GPM constellation of satellites. These satellites include DMSPs from the U.S. Department of Defense, GCOM-W from the Japan Aerospace Exploration Agency (JAXA), Megha-Tropiques from the Centre National D’etudies Spatiales (CNES) and Indian Space Research Organization (ISRO), NOAA series from the National Oceanic and Atmospheric Administration, Suomi-NPP from NOAA-NASA, and MetOps from the European Organization for the Exploitation of Meteorological Satellites (EUMETSAT). All of the instruments (radiometers) onboard the constellation partners are inter-calibrated with information from the GPM Core Observatory’s GPM Microwave Imager (GMI) and Dual-frequency Precipitation Radar (DPR).

Darby dissipated in the Central Pacific Ocean late on July 26.