Tule elk of Point Reyes National Seashore are in conflict with ranchers • Earth.com 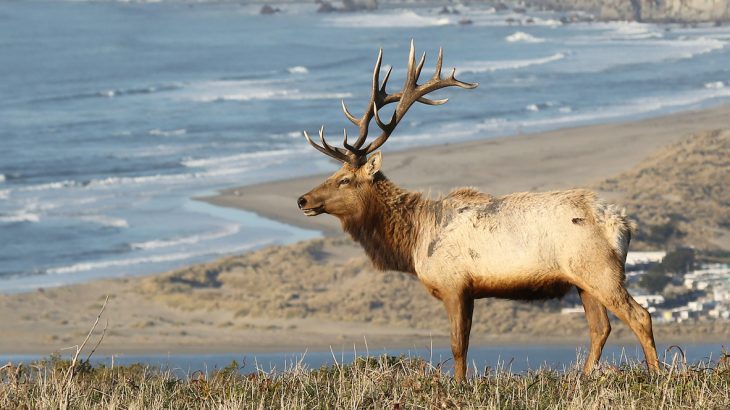 As a federal land management agency, the National Park Service (NPS) is often charged with rather conflicting goals. In the case of the NPS, there are the goals to preserve the land as well as facilitate recreation on it.

In some cases, the NPS also manages non-recreational use of land, such is the case with Point Reyes National Seashore. Point Reyes is one of only two national parks that allow ranching inside their borders. Cuyahoga Valley National Park in Ohio for its part is encouraging farming within its borders to preserve historic farming in the area. Point Reyes National Seashore is unique that it was created under a partnership between local ranchers and the National Park Service in an effort to forestall the possibility of large scale development in the area.

Point Reyes is relatively new as far as land managed by the NPS goes, having been established on September 13, 1962. Since the park was created so recently, many of the cattle and dairy ranches that graze on Point Reyes were in business long before the park was officially recognized.

According to the Point Reyes Seashore Ranchers Association, many of their members have operated in the area since the 1800s. Ranchers now lease land on short term agreements from the NPS that they once owned. In acknowledgement of the hardships of obtaining loans when operating on a five year lease, the park service has considered 20 year leases. At the time, Secretary of the Interior Ken Salazar ordered environmental impact statements and consideration of the longer term leases in 2012.

The Mercury News reported earlier this month that the NPS has released a formal plan to extend leases to 20 years for ranchers at Point Reyes as well as Golden Gate National Recreation Area. Ranchers would also be allowed consideration of diversifying their livestock on a case by case basis. This would mean extending ranch leases on 26,000 acres of federal land.

The NPS plan also calls for limiting the size of the Drake’s Beach tule elk herd from its current estimated population of 124 to 120 individual elk. This is the option preferred by the NPS as opposed to alternatives put forward such as killing all the elk and removing all ranchers. The plans are now open for public comments until September 23.

The different plans highlight the inherent conflict between ranching and elk populations at Point Reyes National Seashore. Tule elk are a subspecies found only in California. The elk population was once as large as 500,000 individuals but decimated to a low point of just two tule elk in the 1870s. Luckily, the two remaining elk were a male and a female which allowed the elk population to rebound.

Today, there are approximately 5,700 elk living in 22 largely isolated herds throughout the state of California. Besides the elk own resilience the population rebound is the result of hard work and money on the part of captive breeding and reintroduction programs by the state of California. Tule elk were reintroduced to Point Reyes National Seashore in 1978 as part of the statewide recovery. There is still more habitat available for the elk to inhabit but their population growth has run into a roadblock of human intolerance.

The growing population of tule elk on state land has not been looked upon kindly by ranchers in California.  The Las Angeles Times reports that ranchers have also called on the NPS to limit elk populations on the ranch land they lease at Point Reyes National Seashore. Ranchers complain that the elk compete with cattle for grass as well as damaged fences.

The state management agencies have quietly moved ‘excess’ elk to other herds in an effort to minimize conflict. The Wind Wolves Preserve, managed by the non-profit The Wildlands Conservancy, has taken many of the elk. Despite these effortsl the west is a place of contradictory ideas two of the most cherished being wilderness and the cowboy.

With growing human populations and less land available, ranching and wildlife are as much at odds as ever. The western landscape as we know it was created over the conflict between wild animals like bison, wolves, bears and the domestic cow.

Many environmentalists are as unhappy with the presence of the ranchers on federal land as the ranchers are unhappy about the elk. In a press release, The Center for Biological Diversity said that the NPS plan would enshrine cattle grazing as the primary use of a large part of the seashore.

“This is a shockingly anti-wildlife plan, and killing these elk will do nothing to fix or reduce the environmental damage caused by cattle ranching…What is the Park Service thinking? Allowing expansion of commercial agricultural activities would inevitably lead to further conflicts with other native wildlife. After the elk shooting starts, get ready for ranchers to call for the slaughter of the park’s bobcats, foxes and birds.”

Conservationists point out that the plan would allow longer leases for cattle and more livestock. The cost of this expanded ranching and farming is paid by NPS employees shooting elk to control the only population of tule elk on national park land, made up of only two herds.

Conflict between ranchers and wildlife is nothing new. Conflicts have flared up between ranchers and wolves in Washington, with bison near Yellowstone, and have pushed historic predator eradication efforts across the United States. In other countries, livestock have created conflicts with lions and other top predators.

The main question is whether there is enough room for the western mythology of a rugged, self sufficient rancher next to the reality of an overdue rewilding of the American west? Now is the time to speak up, as the NPS is accepting comments on its plans until September 23.