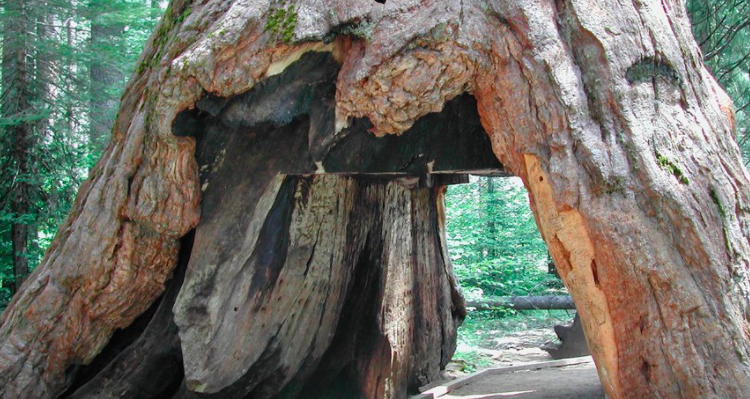 If a tunnel tree falls in the forest…

The “Pioneer Cabin Tree,” of Calaveras Big Trees State Park in Northern California, has been toppled by a powerful winter storm. The ancient sequoia had been carved into a living tunnel over a hundred and thirty years ago, allowing horses, and eventually cars to pass through. In recent years, passage through the base of the towering tree had been restricted to hikers.

The Associated Press reports that last weekend’s storm may have been the largest to hit California and Nevada in over ten years, leading to flooding and mudslides in some regions. At over 150 feet tall and with a base of approximately 33 feet in diameter, the iconic tunnel tree was not able to withstand the storm.

A post on the Calaveras Big Tree Association’s Facebook page stated, “The storm was just too much for it.”

It was reported on Sunday by state park volunteer Jim Allday that Pioneer Cabin had fallen. SFGate spoke with Allday to confirm that local flooding was likely the cause of the tree’s demise.

“When I went out there [Sunday afternoon], the trail was literally a river, the trail is washed out,” Allday said. “I could see the tree on the ground, it looked like it was laying in a pond or lake with a river running through it.”

Jim’s wife. Joan Allday, added that the tree had been weakening for several years.

“It was barely alive, there was one branch alive at the top,’ she said. ‘But it was very brittle and starting to lift.”

While sequoias can live for more than 3,000 years, it’s unclear exactly how old the iconic tree was. According to the Los Angeles Times, trees in Calaveras Big Trees State Park are estimated to be more than 1,000 years old.

In the 1800s, tunnel trees were created to promote tourism. Cutting through a living sequoia can do damage to the tree and most of the tunneled-through sequoias in California are dead. Wawona Tree in Yosemite National Park, the most renowned at an estimated 2,100 years old, was felled by a winter storm in 1969. Many of the remaining sequoia tunnels are fallen trees – logs on their sides carved through for passage.

“Tunnel trees had their time and place in the early history of our national parks,” the National Park Service has written. “But today sequoias which are standing healthy and whole are worth far more.”