Newly discovered underwater volcanoes may be a biological hotspot • Earth.com 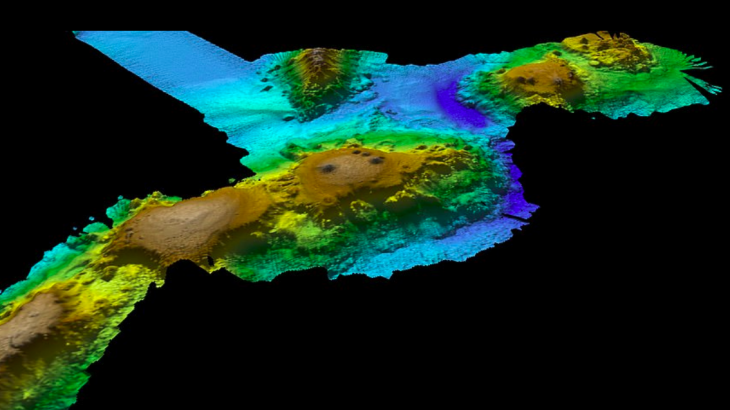 Newly discovered underwater volcanoes may be a biological hotspot

A research expedition led by Australian National University (ANU) has discovered a “lost ocean world” of underwater volcanoes about 250 miles off the coast of Tasmania.

The scientists were aboard the Commonwealth Scientific and Industrial Research Organisation (CSIRO) research vessel Investigator mapping the seafloor when they stumbled upon the previously unknown chain of seamounts.

The volcanic mountains tower up to 1.9 miles over the surrounding ocean floor, with the highest peaks reaching about 1.2 miles from the water’s surface.

“This is a very diverse landscape and will undoubtedly be a biological hotspot that supports a dazzling array of marine life,” said CSIRO team member Dr. Tara Martin.

“Our multibeam mapping has revealed in vibrant detail, for the first time, a chain of volcanic seamounts rising up from an abyssal plain about 5000m deep.”

According to Dr. Martin, the volcanic towers vary in shape and size, ranging from sharp peaks to wide flat plateaus covered with tapered hills that resulted from ancient volcanic activity.

“Having detailed maps of such areas is important to help us better manage and protect these unique marine environments, and provides a stepping stone for future research,” she explained.

Across the mountain chain, the researchers detected spikes in ocean productivity, including elevated phytoplankton activity.

Dr. Eric Woehler from BirdLife Tasmania, who was surveying seabird and marine mammals on the expedition, was amazed by the amount of sea life in and around the volcanic seamounts.

“We also saw large numbers of seabirds in the area including four species of albatross and four species of petrel. Clearly, these seamounts are a biological hotspot that supports life, both directly on them, as well as in the ocean above.”

Dr. Woehler explained that the seamounts may act as an important landmark for the humpback whales as they migrate from their winter breeding to summer feeding grounds.

“Lucky for us and our research, we parked right on top of this highway of marine life!”

“We expect that these seamounts will be a biological hotspot year round, and the summer visit will give us another opportunity to uncover the mysteries of the marine life they support,” said Dr Woehler.