The vegetarian diet of the giant panda resembles a carnivore meat diet • Earth.com 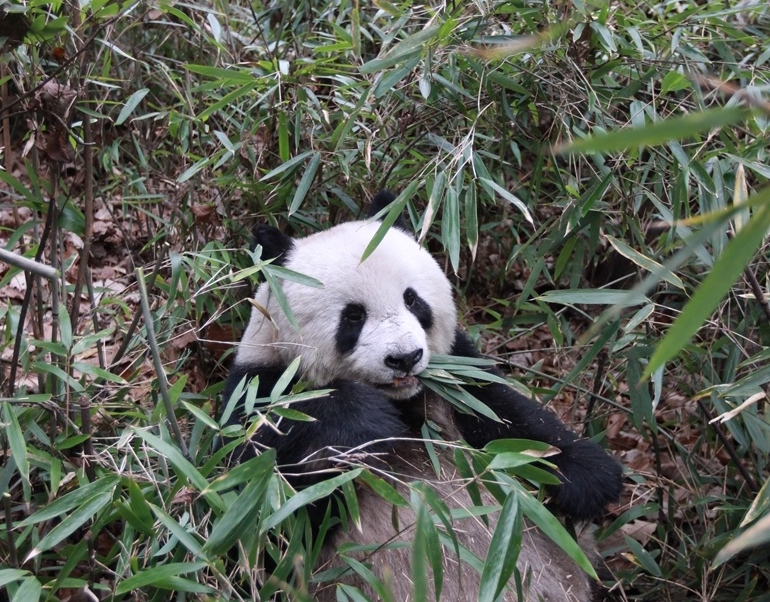 Despite belonging to Carnivora, a group of primarily flesh-eating carnivores, giant pandas are extremely specialized herbivores that feed almost exclusively on bamboo. But now, a new study has revealed that this restricted vegetarian diet may not actually be as different from the diets of carnivores as it would seem.

“As we know, the giant panda is a Carnivora species, yet extremely specialized on a plant food, the bamboo,” said study co-author Fuwen Wei of the Chinese Academy of Sciences. “Based on what they eat, they absolutely belong to the herbivores, but considering the macronutrient composition of the ingested and absorbed diets, they belong to the carnivores.”

For the investigation, Wei teamed up with nutritional ecologist David Raubenheimer from the University of Sydney to examine the macronutrient composition of the diets of giant pandas. Using a technique called nutritional geometry, the team showed that this macronutrient mix is unlike herbivores, yet similar to carnivores.

According to the researchers, the findings can help resolve long-standing questions concerning the evolution of the giant panda, including the unusual transition to extreme specialized herbivory by a member of a carnivorous clade.

As herbivores, giant pandas saw evolutionary changes in their teeth, skull, and in the pseudo-thumb needed to process bamboo. However, the gut and digestive system of giant pandas did not change much. This indicates that minimal modification was required to handle the macronutritional properties of bamboo.

“There is also a broader message from this study,” said Raubenheimer. “It demonstrates the importance of considering both foods and nutrients in understanding the evolutionary ecology of animals. This is what nutritional geometry is designed to do.”