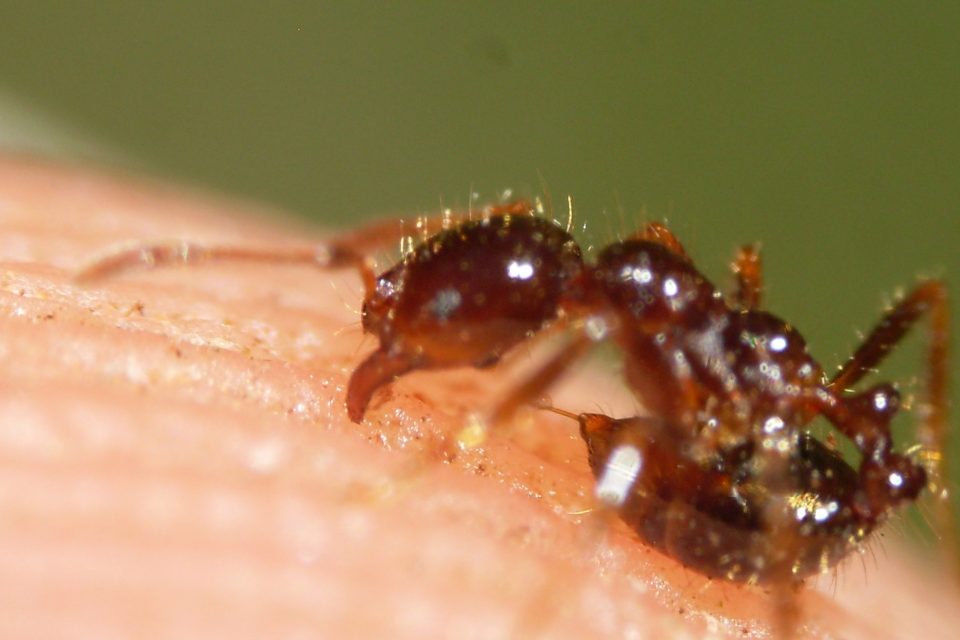 A new study from the Universidade Federal do Rio de Janeiro has illuminated the actions of the protein component of fire ant venom on envenomated mice.

Unusually for hymenopterans, the red imported fire ant (Solenopsis invicta), also referred to as RIFA, produces venom that is largely composed of alkaloids, which are more frequently found in plants. More than 95% of the venom is made up of these alkaloids, known as solenopsins. Proteins make up less than 1%. Solenopsins are cytotoxic and are responsible for the formation of the distinctive pseudo-pustules left by fire ant stings. These painful welts look like pimples and appear soon after the ant stings.

Solenopsins also appear to have fungicidal, herbicidal, bactericidal, and insecticidal properties. In addition to aiding in prey capture and defense, they are used in nest maintenance, presumably to eliminate undesirable organisms from the ant colony. Interestingly, though they also have neurotoxic effects and are responsible for the release of histamines by affected cells, solenopsins appear to have no role in the allergic response to fire ant stings.

The allergic response is instead caused by the 46 proteins known from the venom, four of which are well-described. Determining the pathways by which this happens has until recently been challenging due to the difficulty in extracting and isolating these proteins.

Venom amounts to some .1% of the body weight of a fire ant and only a small proportion of that amount constitutes proteins. However, a recent procedure developed for extracting venom and purifying the protein components allowed the study’s authors to test their effects in vivo on mice without the complicating factor of the solenopsins.

Upon entering the body for the first time, the venom proteins are enveloped by dendritic cells and transported to lymph nodes. The dendritic cells present the peptide antigens generated by the proteins, coupled to a major histocompatibility class II molecule spanning the cell membrane, to naive T lymphocytes. T lymphocytes are a type of white blood cell key in regulating the immune system. Once activated by exposure to the antigens, they clone themselves. The lymphocytes then trigger a cascade of further activity, including the release of immunoglobin E (IgE) antibodies, which then bind to mast cells, a type of white blood cell that is know as the “master regulator” of the immune system. Upon a second exposure, antigens from the venom signal the mast cells to release histamines in amounts disproportionate to the actual effects of the antigens. This is responsible for the inflammatory response typical of an allergic reaction. Adding to the inflammation is the activation of eosiniphils, another type of white blood, which are stimulated to release harmful proteins in an effort to destroy the antigen. These substances also cause tissue damage.

In this study, the authors injected purified RIFA venom into the hind footpad of a previously unexposed mouse. Fourteen days later, they administered a second injection, either in another footpad or into the peritoneal cavity, the space between the lining of the abdominal wall and the abdominal cavity itself. The second footpad injection resulted in marked swelling. Fluid drained from the peritoneum following exposure revealed elevated levels of eosinophils, suggesting an allergic response. Additionally, dissected lymph nodes from sensitized mice revealed hyperplasia, or enlargement, suggesting a strong immune response to the venom proteins.

This development is important due to the ubiquity of the red imported fire ant and its negative interactions with humans. Some 14 million people in the U.S. alone are thought to suffer stings each year and up to 100,000 seek medical attention. Originally from South America, the ant has been transported around the world by shipping and is now established in China, Vietnam, and Australia, among other locales. Knowledge of the actions of fire ant venom proteins is likely to assist in treating allergic individuals.

This study is forthcoming in the journal Scientific Reports (Nature).