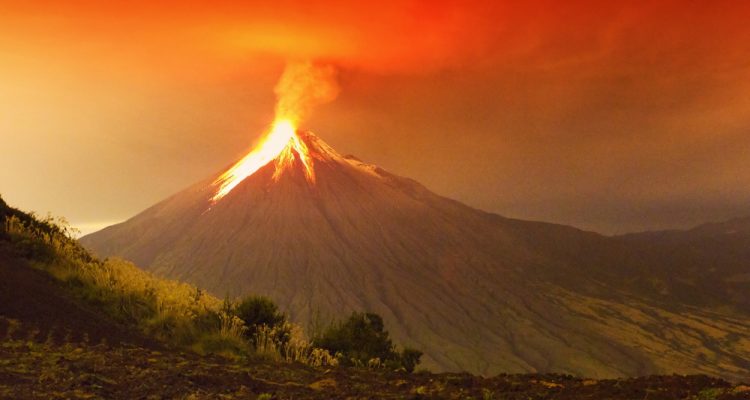 If it’s not giant asteroids headed for the earth, it’s something else. In a bit of incredibly cheerful scientific news, scientists are studying a volcanic eruption that wiped out over half of the earth’s inhabitants because they’d like to be able to predict when we’ll see our next megaeruption.

The supervolcano Toba erupted in Indonesia nearly 74,000 years ago, killing 60% of the Earth’s inhabitants and spewing volcanic ash into the air. Scientists think that the volcano ejected a huge amount of material – somewhere between 2,800 and 5,300 km cubed. This made life on earth quite unpleasant during a time when humans were starting to move out of Africa and spread to other parts of the world.

Scientists including David Budd from Uppsala University are looking at geologic quartz rings to learn more about the Toba megaeruption. Their findings were published in the journal ScienceMag.

‘When the conditions in the magma change, the crystals respond and produce distinct growth zones that record these changes. The problem is that each ‘tree ring’-analogue is only a few micrometers across, which is why they are extremely challenging to analyse in detail,” the researchers said. They’d like to learn why supervolcanoes produce such a large volume of magma, as well as why they lay dormant for so long between eruptions.

Although supereruptions are super-rare, researchers insist that it’s only a matter of time before the next one, which they say could occur at Toba or at Yellowstone in the U.S. A supervolcano erupts when the magma reservoir inside reaches a critical level of pressure.

Researchers have found this sort of reservoir underneath Yellowstone and have been monitoring its activity. According to their data, an eruption at Yellowstone would be a thousand times stronger than the catastrophic Mount St. Helens in 1980.