What dandelions are "thinking" - the secret to their success • Earth.com 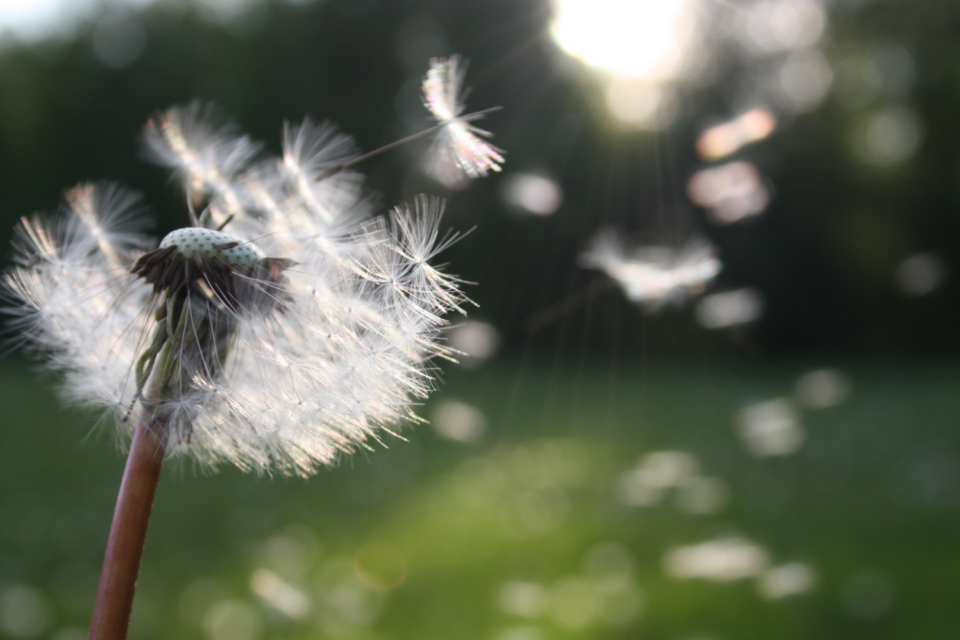 What dandelions are "thinking" - the secret to their success

Dandelions flower in the early spring and provide a welcome source of nectar and pollen to bees, butterflies, birds and other pollinators. As the season progresses, they develop a “fluffy” head of seeds that will be dispersed by wind currents and may help the young-at-heart to tell the time.

Each seed head has a flat platform (or floral podium) on which are situated many small seeds. Each seed is joined by a narrow tube to around 100 bristles or “hairs,” which form the parachute-like structure. This skirt of fine hairs catches the wind and enables the seed to fly off to a new destination. Dandelion seeds are some of the best flyers in nature, often spreading as far as 100 kilometers away from the parent plant.

However, the success of seed dispersal depends on the weather. The all-important fluffy skirt closes when the air is humid (and wind is less likely), and opens wide when the air is dry. In the drier, windier conditions, the many small ‘hairs’ spread apart, enabling each parachute to catch the air currents more successfully and fly the seeds away. But until now, nobody knew how these plants sense and respond to the moisture levels in their environments.

In a study of the microscopic structure of dandelion parachutes, a team of scientists led by Imperial College London has worked out the potential mechanism whereby each seed’s parachute responds to the presence of water vapor in the air. They have also created a model to simulate the fine structure of each parachute and to predict how the relevant components work together to enable the parachute to close in humid conditions and open when it is dry.

The researchers identified a structure at the center of each seed-carrying parachute that acts like an actuator – a device that converts signals into movement – without using any energy. The structure is composed of different types of plant tissues, some of which have cells that absorb water from the atmosphere and swell, while others are composed of cells that resist water absorption. The experts hypothesized that parachute opening and closure arises from the differential water absorption or swelling properties of these different tissue regions.

In fact, most cells of the actuator appear collapsed and are closely packed together in dry conditions. But when water is added the actuator cells show substantial increases in area and circularity as they absorb the water and change shape. This causes radial expansion within two minutes, which pushes the parachute hairs close together and closes the parachute.

“Our findings reveal how the dandelion ensures the survival of its species by making perhaps the most important decision in a plant’s life – to stay or go seek a better habitat,” said Dr. Naomi Nakayama, who led the research.

Researchers at Imperial, the Universities of Edinburgh, Oxford, Lyon and Ecole Polytechnique de Paris, investigated this biomechanical phenomenon using their combination of expertise in plant biology and mechanical engineering. To understand the microscopic changes in the shapes of the cells in humid and dry conditions, they placed dandelions into a humidity-controlled chamber and then measured the changes in the actuator tissues using multiple imaging techniques, including an environmental scanning electron microscope.

Once the experts understood that the floral podium was made of two layers, a top one that did not expand much in the presence of water and an underneath one that absorbed water and expanded easily, they built a structural computer model of the actuator accounting for these differences and for forces associated with changes in hydration level. Their model agreed quantitatively with most of their observations, which indicated that differences in the capacity to absorb water are key to actuation and therefore to parachute opening and closing.

The researchers found that parachute opening is modulated by the level of humidity in the atmosphere: higher humidity triggered swelling in the actuator and mechanical movement of hairs upwards, which closed the parachutes. Some regions of the actuator swelled noticeably, whereas others, such as the vasculature, barely changed. They observed that the actuator shape change was caused by uptake and release of water droplets, creating a crease in the area the parachute hairs are attached.

Plant structures can serve as important inspiration for soft robotics as, like plants, these robots don’t use joints or rigid parts to move appendages. Finding out how dandelion parachutes respond to their environment by moving many appendages simultaneously could help engineers create robots that move multiple fingers and arms with very simple yet functional designs. The way the dandelion actuator changes shape in some tissue regions but not others can also teach us about mechanisms of shaping and movement in soft robots and biological tissues.

“Our work is a great example of what the natural world can teach us about interacting with our environments,” said Dr. Nakayama. “It’s also a fantastic piece of multidisciplinary collaboration: bringing varying disciplines together to spark new ways of investigating biological and engineering problems.”