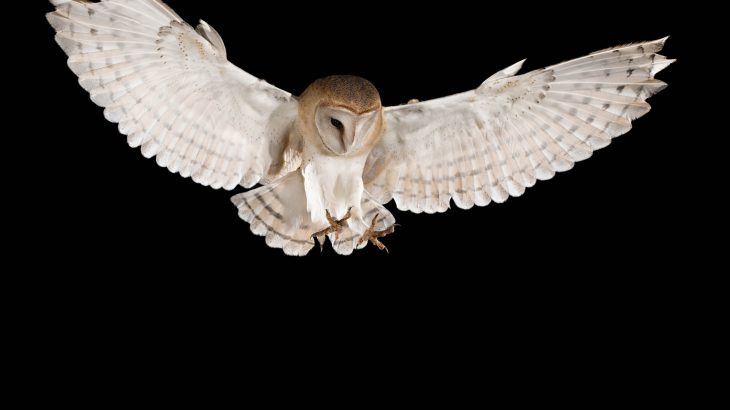 While it may seem that a white barn owl would be at a competitive disadvantage when it is lit up by the moonlight, experts have discovered one way that these shiny feathers work to their advantage. The researchers have demonstrated that, under full-moon conditions, the white plumage causes the barn owl’s preferred prey to freeze in place for longer.

The team set out to determine how moonlight may affect the fitness of nocturnal species with distinctly different colors by studying the hunting success of red and white barn owls. The research was focused on data from long-term monitoring and high-resolution global positioning system tracking.

Led by Alexandre Roulin at the University of Lausanne, the team found that despite the fact that white owls were more conspicuous on moonlit nights, they still managed to catch more rodents than red owls. This is counterintuitive considering that the reddest owls are much more camouflaged under a bright moon.

To investigate, the experts designed an experiment in which they flew taxidermied owls on a zip wire to observe the responses of voles, which are naturally startled by bright lights. As the moonlight reflected off of the white feathers, the voles froze in place longer, giving the owls a better opportunity to catch them.

According to the experts, this may explain why both types of barn owl colors persist. White barn owls may be favored under certain conditions, but the birds’ white plumage causes them to be easily detected by competitors like carrion crows when the moon is not shining brightly.

“Our study shows that the moon differently affects the hunting performance and reproductive success and timing of barn owls with contrasting plumage colorations,” wrote the researchers. “This supports the longstanding, untested hypothesis that moonlight influences coloration of nocturnal animals, particularly by uncovering a link between fitness proxies, moonlight and coloration that was missing in previous studies.”

“Moreover, our study raises the possibility that the unique white coloration of barn owls might be favored by moonlight owing to the effect that the light being reflected from white plumage has on the prey’s behavior.”