Women in the Iditarod and the treatment of racing dogs • Earth.com 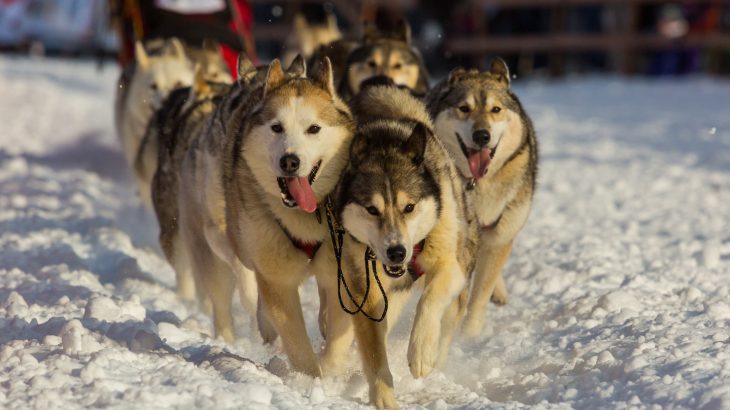 Women in the Iditarod and the treatment of racing dogs

The Iditarod Trail Sled Dog Race is famously billed as the ‘last great race on Earth’.  The race is a 1,100 mile long endurance test in one of the most grueling environments in the world.  The last winner took 9 ½ days to complete the Iditarod, but the slowest winning time was over 20 days in 1974.  The longest time taken to complete the race is an excruciating, 32 days, 15 hours and nine minutes. A lot of the time it takes to finish a dog race like the Iditarod comes down to conditions outside of a musher’s control, conditions like weather, snow, ice, wildlife attacks.

Alaska places much of its local identity on ruggedness and the Iditarod is part of that; photos of sled dogs cover postcards, press clippings decorate Alaskan restaurants.  I remember a sign in one Alaskan establishment that proclaimed, “Alaska, where the men are men and women win the Iditarod”. That sentiment becomes more and more true each year.

Libby Riddles was the first woman to win the Iditarod more than thirty years ago in 1985.  Over the course of the race, the temperature dropped to -50°F and Riddles pushed through weather conditions other sat out in safety and relative comfort.  Libby Riddles seems to have paved the road for future female adventure athletes.

Born in Massachusetts and educated at Colorado State University where she studied to be a veterinarian technician, Susan Butcher won the Iditarod four times, in 1986, 1987, 1988 and 1990.  Only one person, Rick Swenson, has won more Iditarods (5) to this day.  Butcher first competed in the Iditarod in 1978 and over her career set several records before retiring and passing away from Leukemia in 2006.  In 2008, the state of Alaska established a Susan Butcher day, celebrated the first Saturday of March.

Butcher, like Riddles, and every racer in the Iditarod faced hardship. She had to drop out of the race in 1985 when two of her dogs were killed and several were injured by a moose.  The Iditarod is still a male dominated race; a woman hasn’t won the race in 25 years, but that’s bound to change soon. Now almost a third of the racers are women NPR reports.  Besides concerns of gender equality, often raised in sports, another controversy has plagued the Iditarod – treatment of dogs.

The Iditarod was originally formulated as a tribute to the Iditarod trail.  The trail was originally a life line for non-native Alaskans to the rest of the world where food and medical supplies could be delivered to remote outposts of the Alaskan ‘frontier’.  As such, the race is a tribute to the harsh realities of the Alaskan environment and a partnership between humans and non-humans to survive there. Things have changed since the times when a dog sled was the only way to deliver important medicine to Alaskan villages.

The world of 2019 is a very different one from the world of 1973 when the first Iditarod was officially run.  1973 was less than twenty years after the official founding of Sea World in 1959 and decades before the 2013 documentary Blackfish revealed a lot of problems with that park.  It was only in 1966 that the Animal Welfare Act was signed into law, less than ten years before the first Iditarod.  Several amendments have been made to the Animal Welfare Act since it was first created, the last being in 2013.  According to FoodRevolution.org, veganism has increased by 600% in the US from 2014 to 2017 alone.  It’s not surprising considering how views of animal treatment have changed in the US that a race that in some ways supports an antiquated relationship between humans and dogs has its own controversies.

According to Sled Dog Action Coalition, at least 153 dogs have died in the Iditarod; meanwhile no humans have died during the race.  Statistics of dog deaths from the early years of the race weren’t kept but a resident of Alaska for 40 years, Ted Almasy is quoted:

“That first race, from Anchorage to McGrath, all you could see along the trail was dog blood and dead dogs. That’s when I got into it with them. After each Iditarod, we used to see dead dogs at the dump. You’d see them [Sic] poor dogs, blood coming out of both ends. ”

Words like these raise serious questions of the ethics of a race that simultaneously romanticizes a team of dogs and risks their health and lives without consent.  Indeed, in most of the US, keeping a dog outside in below freezing temperatures for 12 days warrants an animal cruelty conviction, according to ThoughtCo.  The race is trying to adapt a bit to changing views on animal treatment ethics.

Any musher that has been convicted of animal cruelty is disqualified from the race.  There are checkpoints where a veterinarian can check the health of dogs but racers aren’t required to stop at these checkpoints.  Ramy Brooks, a musher, was disqualified for blatant cruelty, such as beating dogs for not continuing across an icefield. Brooks was allowed to race in later years and one of his dogs died in the 2007 race, but it was concluded that the death was unrelated to beating.  Beyond the race itself, culling dogs that aren’t good racers is a common practice among kennels training to compete. A question worth asking is if the Iditarod is capable of changing enough to be seen as morally acceptable in a world where animals are recognized as having more rights and capacities than previously?

Could the answer to change in the treatment of animals be in who the mushers themselves are?  An article in the Vancouver Sun asked, “Do men care less about animals than women?”  The answer seems to be as a group, yes.  One study examining 268 prosecutions of animal cruelty found that men are convicted in a ratio of 29 to 1 compared to women in animal abuse.  Other studies have found that women as a group nearly always have more sympathy for animals than men.

Are the women now racing in the Iditarod a wind of change that could not only lift the status of women in a rugged wilderness race but also push for better treatment of dogs or are the women now racing pushing for victory at all costs?  Blair Braverman in particular, a nature writer and first time competitor in this year’s Iditarod, has already pushed back on the male stereotypical view of man vs. nature, promoting a more feminine perspective on nature in High Country News.

Will more female competitors mean more female spectators that may in turn raise more questions about the treatment of sled dogs?  Only time will tell. We can only hope that the race, one that celebrates wilderness and human animal collaboration, can fulfill its promise or simply cease.