Yellowstone geyser breaks record for most eruptions in a year • Earth.com 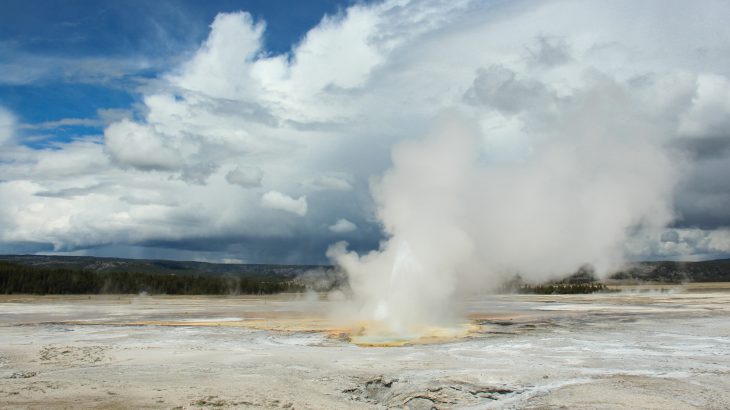 Yellowstone geyser breaks record for most eruptions in a year

The world’s tallest geyser set a new record this past weekend when it erupted for the 30th time in 2018. Located in Yellowstone National Park, the Steamboat Geyser broke its previous record of 29 eruptions, which was set in 1964.

The explosive geyser can shoot hot water and steam as high as 400 feet into the air, which is over three times the reach of Yellowstone’s most famous geyser, Old Faithful.

According to park officials, Steamboat went through about five decades of little to no activity before revving up in the 1960s.

Yellowstone geologist Jeff Hungerford told Local News 8: “The heightened activity at Steamboat this year is uncommon but not unprecedented. We have seen similar activity twice previously; once in the early 1960s, and again in the early 1980s.”

“Conversely, the world’s tallest active geyser has also exhibited years of quiescence or no major eruptions, with the longest being the 50-year period between 1911 and 1961.”

Earlier this year, March 15 marked Steamboat’s first eruption in three and a half years, which was followed by an explosion nearly every week over the summer. Most recently, the geyser erupted around 1:00 a.m. on Saturday.

Many of Steamboat’s eruptions are powerful and extremely loud. The water phase of a major eruption can last anywhere from 3 to 45 minutes, while the subsequent steam phase can last for several days.

Currently, most of the roads are closed across Yellowstone National Park for the winter. Hungerford added: “We’ll continue to monitor this extraordinary geyser.”