Step aside supervolcano, this is Yellowstone’s biggest threat • Earth.com 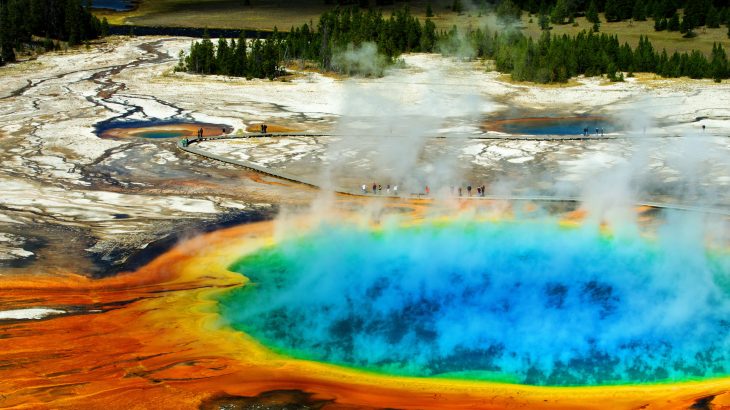 Step aside supervolcano, this is Yellowstone’s biggest threat

Researchers have long speculated about the Yellowstone Caldera, whether or not it’s likely to erupt in this lifetime, and what that would mean for life on Earth.

However, a recent report published in USA Today found that a volcanic eruption isn’t the natural disaster we should be worried about. Instead, a 7.0 magnitude or larger earthquake underneath Yellowstone is much more likely to occur in the coming years.

Yellowstone is one of the most seismically active regions on the planet, and up to 2,500 mini-quakes occur in the park every year unbeknownst to the millions of tourists that flock to the area.

Bigger quakes have happened in Yellowstone, and in 1959, a huge earthquake caused massive devastation.

The 7.3 earthquake created a landslide that killed 28 people and caused 80 million tons of debris and rocks to come loose and block off a river, according to USA Today.

Now experts agree that it’s not a matter of if but when another large earthquake will strike the area.

“The biggest concern we have for Yellowstone is not with the volcano, it’s with earthquakes,” Michael Poland, the scientist-in-charge at the Yellowstone Volcano Observatory told USA Today. “This is an underappreciated hazard in the Yellowstone area. There can and there will be in the future magnitude-7 earthquakes.”

What is most concerning to scientists is that in the event of another major earthquake, the effects will be far more devastating than what happened in 1959, as there are now far more people visiting the park every year.

There are more than 40 seismic stations located around Yellowstone that are constantly monitoring and recording the seismic activity of the region, and although no one can yet predict exactly when an earthquake will strike, data records are crucial for predicting the likelihood of future activity.

Although there are very good chances that a large earthquake will occur in the future, it doesn’t pose enough of an imminent threat to merit too much concern for park visitors.

“We like to talk about these big, grandiose things happening like big earthquakes or large volcanic eruptions, but those are highly unlikely events,” Jamie Farrell, a geology professor at the University of Utah, told USA Today. “You’re in much more danger driving to Yellowstone than you would be by any of these things happening while you’re there.”