Zebras may have gotten their stripes as a defense against parasites • Earth.com 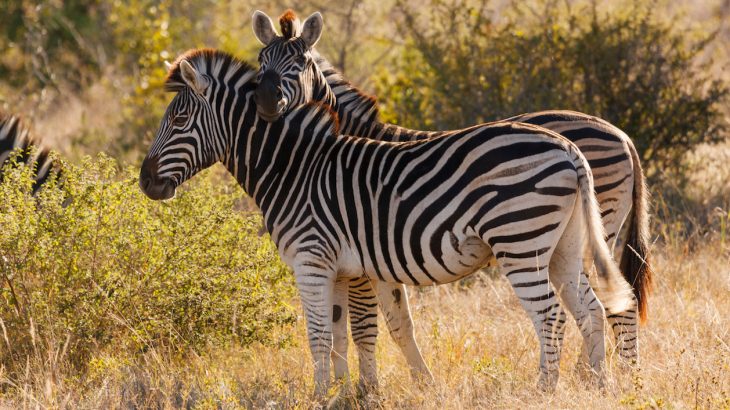 Zebras may have gotten their stripes as a defense against parasites

Researchers from the University of Bristol and the University of California, Davis have found evidence to suggest that zebras developed their stripes to ward off blood-sucking parasites. Their work, published February 20th in PLOS ONE, adds more information to the 150-year-old mystery — why do zebras have their stripes?

Theories as to why the zebra developed such a drastic pattern run the gamut. Some scientists believe that the stripes scare off predators. Others think they help the zebra regulate their heat. However, Professor Tim Caro, Dr. Martin How, and their colleagues have found that horse flies react differently to zebras than they do to regular horses.

The team studied horse fly behavior around captive zebras and domesticated horses at a livery in North Somerset via video analysis. They found that although the flies aren’t deterred by zebra stripes at a distance, they fail to slow down while approaching zebras, which is essential for landing.

“Horse flies just seem to fly over zebra stripes or bump into them, but this didn’t happen with horses,” said Caro, a Honorary Research Fellow from the University of Bristol School of Biological Sciences. “Consequently, far fewer successful landings were experienced by zebras compared to horses.”

“This reduced ability to land on the zebra’s coat may be due to stripes disrupting the visual system of the horse flies during their final moments of approach,” said Dr. How, a Royal Society University Research Fellow in the School of Biological Sciences. “Stripes may dazzle flies in some way once they are close enough to see them with their low-resolution eyes.”

The team also experimented with draping horses with zebra stripe-patterned sheets to ensure the zebra’s scent or behavior wasn’t what was tripping up the horse flies. They found that fewer flies landed on the horses when they were draped with zebra-striped livery than before.

Furthermore, zebras exhibited defensive and preventative behavior if and when flies landed on and bit them. The animals would run away and swish their tail at a much higher rate than horses do. Therefore, flies spent much less time feeding on zebras than they did horses.

These findings suggest that zebra-striped anti-fly wear may be beneficial for domesticated animals to wear to improve their health and wellbeing.