What is Asbestos? • Earth.com 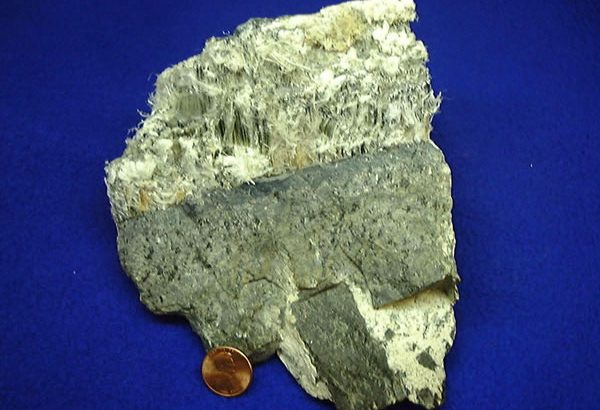 (Greek a-, “not”; sbestos, “extinguishable”) is a group of fibrous metamorphic minerals. The name is derived for its historical use in lamp wicks; the resistance of asbestos to fire has long been exploited for a variety of purposes. Egyptians was using it in fabrics such as burial cloths and Charlemagne’s tablecloth.

Mixing Of the fibers with cement or woven into fabric are making the asbestos able to resist the heat. So people was using it in brake shoes and gaskets for its heat resistance, and in buildings for its flame-retardant and insulating properties, its tensile strength, flexibility, and resistance to chemicals. However, the inhalation of asbestos fibers cause various illnesses, including cancer, so many countries are banning most uses of asbestos

Most respirable asbestos fibers are invisible to the unaided human eye because their size is about 3.0-20.0 Ã‚Âµm in length and can be as thin as 0.01 Ã‚Âµm. Fibers ultimately form because when these minerals originally cooled and crystallized, they formed by the polymeric molecules lining up parallel with each other and forming oriented crystal lattices. These crystals thus have three cleavage planes as other minerals and gemstones have. But in their case, there are two cleavage planes that are much weaker than the third direction.

Thus when sufficient force is applied they tend to break along their weakest directions, resulting in a linear fragmentation pattern and hence a fibrous form. This fracture process can keep occurring over and over until they have been broken down to their smallest unit dimensions. For this reason, one larger asbestos fiber can ultimately become the source of hundreds of much thinner and smaller fibers in a normal environment over the course of time. As they get smaller and lighter, they become more mobile and more easily entrained (wafted) into the air, where human respiratory exposures typically result.

Blue asbestos is commonly thought of as the most dangerous type of asbestos (see above and below).

Serpentine rocks are those with curled fibres. Amphiboles have straight, needle-like fibres. Fibrous form of the amphiboles are friable and the most carcinogenic, although they also exist in safer non-fibrous forms.

Other asbestos minerals, such as tremolite, actinolite and anthophyllite are less-used industrially but it enter in a variety of construction materials and insulations and occur in a few consumer products, such as talcum powders and vermicullite. In the United States, the U.S. Environmental Protection Agency (EPA) has banned all construction-related products that have asbestos content of 1% or greater. It has also banned asbestos in all other friable (easily crushed by finger pressure) products.

Strong concerns about the health hazards associated with asbestos had been described many times over the years.

In 1898, the Chief Inspector of UK Factories reported to the Parliament about the “evil effects of asbestos dust”. He reported the “sharp, glass like nature of the particles” when allowed to remain in the air in any quantity, “have been found to be injurious, as might have been expected”. (Report of the Select Committee 1994).

In 1906, a British Parliamentary Commission confirmed the first cases of asbestos deaths in factories in Britain and recommended better ventilation and other safety measures.

In 1918, a US insurance company produced a study showing premature deaths in the asbestos industry in the United States and in 1926 the Massachusetts Industrial Accidents Board processed the first successful compensation claim by a sick asbestos worker.

The fine asbestos fibres are easily , and can cause a number of respiratory complaints, including a potentially serious lung fibrosis called asbestosis. Exposure to asbestos has also been determined to cause a very serious form of cancer, mesothelioma, that occurs in the chest and abdominal cavities. This aggressive disease is not properly referred to as a lung cancer, as the malignant cells are derived from the mesothelium, a tissue found on the inner walls of the chest and abdominal cavities and on the outer surface of the lungs rather than in the lung itself.

When inhaled, asbestos is carcinogenic. In the United States alone, it is estimated that ten thousand people die each year of asbestos-related diseases, such as mesothelioma, asbestosis, lung cancer, and gastrointestinal cancer. Asbestos has a synergistic effect with tobacco smoking in the causation of lung cancer.

In the United States, asbestos was one of the first hazardous air pollutants regulated under Section 112 of the Clean Air Act of 1970.

Today, lawsuits claiming that asbestos caused plaintiffs’ diseases form a gigantic part of the total amount of lawsuits pending in American courts. Since the late 1970s, approximately 6% of all filings in American courts each year were related to asbestos. As of 2004, asbestos cases result in about 600 to 700 appellate opinions per year (that is, including both federal and state courts); this number obviously does not include countless more cases that were not appealed, or were settled or otherwise abandoned before trial. Estimates of total American deaths attributable to asbestos range from 200,000 to 265,000 (according to the March 1991 Report of the Judicial Conference Ad Hoc Committee on Asbestos Litigation).

Asbestos-related cases were a rare sight on the U.S. Supreme Court docket prior to 1980, but since then, the Court has dealt with asbestos-injury cases in 2002, 1999, 1997, 1995, 1993, and 1986. The 1999 and 1997 cases both involved giant settlement class actions that were designed to stabilize the liability of the largest defendants. Both settlements were ultimately overturned by the Court.

In the U.S. Congress, legislation has been introduced each session for many years, proposing to ban civil lawsuits against asbestos manufacturers and instead establish a settlement fund for victims.

Asbestos liability is by far the largest issue facing the global insurance industry today, with the industry protesting because many are suing because they have been exposed but have not as yet contracted asbestos-related lung diseases, which have latency periods of 10-40 years.

In mid-2004, a huge public outcry across Australia followed revelations at a New South Wales government-sanctioned inquiry into the company James Hardie’s handling of its asbestos injury liabilities. See that article for details.

In Brazil, prohibition of extraction and use of asbestos is currently under consideration.

Many buildings contain asbestos, which was used as a flame retardant. Typically, asbestos was “flocked” under false ceilings, inside technical ducts, and in many other small spaces where firefighters would have difficulty gaining access. Structural components like asbestos panels were also used.

Depending on how and where asbestos was applied, it might not pose any risk to most users of the building. If the fibers cannot dislodge themselves, they cannot be inhaled, and thus the risk is absent. However, with certain ways of applying asbestos, particularly flocking, asbestos fibers may gradually drop off into the air. Furthermore, in all cases, asbestos poses special hazards to maintenance personnel who have to drill holes in walls for installation of cables or pipes.

Also, even if the workers are protected, such maintenance operation may release fibers into the air, which may be inhaled by other users later. As a consequence, interventions in areas where asbestos is present often have to follow stringent procedures.

The removal of asbestos from a building is quite difficult because of the above constraints. If removal is to be performed when users are still present in the building, it is usually necessary to relocate some of them temporarily. Typically, the part of the building from which asbestos is being removed has to be sealed off in order to prevent contamination of the other areas.

Even if the building is closed to normal users, it is necessary to seal it off from outside atmosphere so that innocent bystanders are not contaminated. Accordingly, asbestos removal projects are long and costly. Examples of long asbestos removal enterprises include the Jussieu Campus (begun circa 1996 and still going on as of 2005) and the Tour Montparnasse (in 2005, projected duration was 3 years if the tower was emptied of its users, and 10 years if it was not).

An asbestos-containing building that is to be torn down may have to be sealed, and to have its asbestos safely removed first before ordinary demolition can be performed. The asbestos removal may take longer and cost more than the actual tearing-down of the building.