What is Astatine? • Earth.com 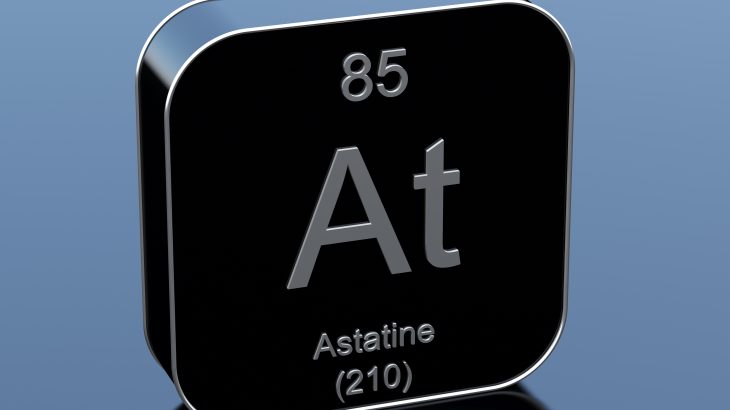 is a radioactive chemical element. The symbol for Astatine is At and its atomic number is 85. At is the heaviest halogen discovered. It was first produced by Dale R. Corson, Kenneth Ross Mackenzie, and Emilio Segrè in 1940. Although At is produced by radioactive decay in nature, it is typically found only in miniscule amounts due to its short half-life (the time it takes for one half of the atoms of a given radioactive substance to decay or disintegrate). Trace amounts are also found in natural minerals. Astatine is currently Earth’s rarest element (only one ounce is contained within the entire planet’s crust).

Astatine has been confirmed to behave chemically similar to that of other halogens, including iodine. It is believed that this highly radioactive element might accumulate in the thyroid gland like iodine. Astatine is thought to be more metallic than iodine. Researchers at the Brookhaven National Laboratory have performed experiments measuring reactions involving astatine; however, this research is very limited as astatine is extremely rare (which is a consequence of its extremely short half-life). Its most stable isotope has a half-life of 8.3 hours. Astatine reacts with other elements such as sodium and hydrogen (forms hydrogen astatide). At is far less reactive than iodine, and is the least reactive of all the halogens.

Astatine comes from the Greek word astatos, meaning “unstable”. Scientists tried finding the element that followed iodine in the halogen group of the periodic table for a long time. The unknown substance was called Eka-iodine before its discovery in 1931 at the Alabama Polytechnic Institute (Auburn University). Its discovery led to the elemental name alabamine (Ab) for a few years. This discovery was later determined to be a mistake. The name Dakin was proposed for this element in 1937 and also Helvetium when a Swiss chemist discovered element 85 in 1940. Not until three years later would the element become known as astatine.

As astatine is recognized as the rarest element on the planet by the Guinness Book of World Records. At any given time there is less than one ounce of At within Earth’s crust, due to its relatively short half-life. Astatine is produced by bombarding bismuth with alpha particles. Once the longer lived At-209 – At-211 compounds are obtained, it is distilled by heating it in the presence of air.

Astatine is typically synthesized in microscopic amounts and studied intensively before it reaches its inevitable radioactive disintegration. Concentrated amounts of astatine compounds are normally diluted with large amounts of iodine, which acts as a carrier, to provide sufficient material for laboratory testing. These compounds are being studied for potential use in nuclear medicines. Astatine may form ionic bonds with other elements such as sodium. Astatine also reacts with hydrogen and forms hydrogen astatide (HAt). When this form dissolves in water, it forms hydroastatic acid.

Astatine has 33 isotopes, all of which are radioactive. The range of their mass is from At-191 to At-223. It also occurs in 23 meta-stable states. The shortest lived known isotope in astatine is At-213, with a half-life of 125 nanoseconds. The shorter lived isotopes have no practical uses, but the heavier compounds have some medical uses. At-211 is used in radiation therapy. In the treatment of tumors in humans, scientific studies have shown that alpha-emitting radiocolloid can be effective without causing toxicity to normal tissue. By comparison, beta-emitting colloids do not prevent the growth of malignant cells. These results have tremendous implications for the development and use of alpha-emitters for the treatment of cancerous tumors.

Since astatine is radioactive, it should be handled carefully. But because of its extreme rarity, it is very unlikely the general public will ever be exposed. Astatine is a halogen, and precautions are necessary. Although it is reactive, it shares similar chemical qualities with iodine.