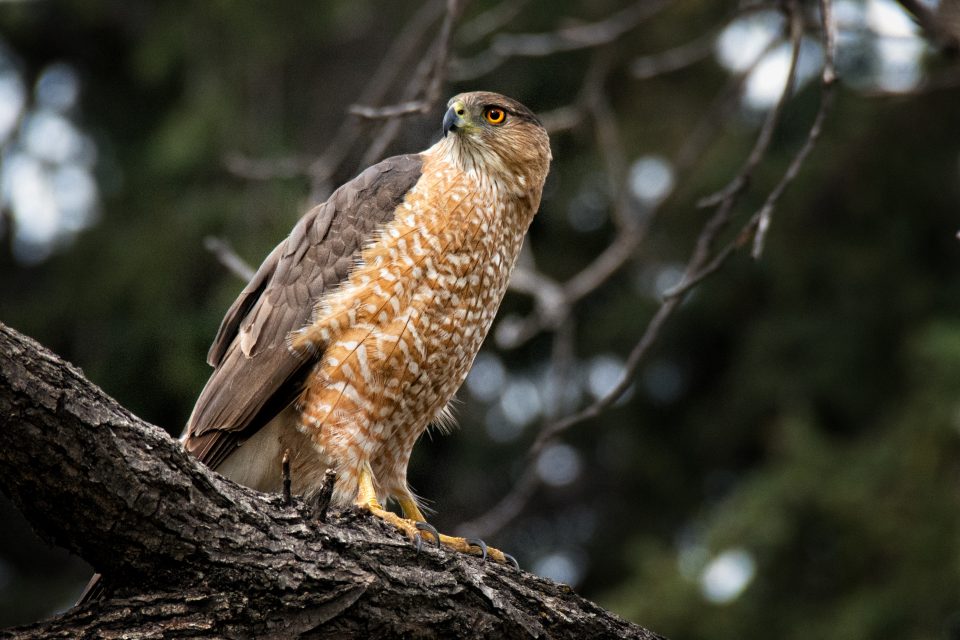 A bird of many names, the mysterious Cooper’s Hawk is a major player amongst North American raptor species. Its scientific name is Accipiter cooperii. In addition to cooper’s hawk (the bird’s most ubiquitous common name), it is also given a swath of other monikers such as blue darter, chicken hawk, striker, and shift hawk.

The cooper’s hawk breeds throughout much of the United States, Southern Canada, and Nothern Mexico. They have a wide range of northern populations migrating south for the winter. They often migrate alone. Sometimes, they make it as far south as Panama.

How To Identify A Cooper’s Hawk In The Wild

Cooper’s hawks live in forests and woodlands but are also often spotted in suburban lots, open fields, or parks with trees. It is one of the few species of predator birds that persists and thrives in urban areas. However, glass windows, wind turbines, and poorly lit radio towers account for many individual bird deaths. Cooper’s hawks are a medium-sized bird. A person can identify the bird by its short, round wings and long tail. They exhibit an upright posture when sitting on a branch and have blueish-grey underparts. In contrast to the rest of their plumage, cooper’s hawks have a black cap and yellow-to-red eyes. Their bill is strongly hooked and they have dense reddish-brown barring on their chests. Females can weigh up to 35% more than males.

Different than a fully mature bird, an immature cooper’s hawk will have yellow eyes and strong brown streaks across its underparts, which are brown and white. It will still have an upright posture and a long tail.

Generally, these birds are quiet outside of the mating season. Scientists have noted over 40 different vocalizations, however, which is more than most other raptors.

Accipiter species can be really tricky to identify. Sharp-shinned hawk (Accipiter striatus) and northern goshawk (Accipiter gentilis) appear almost indistinguishable for those with an untrained eye. Look for the long tail with a body similarly sized to that of a crow’s to make your best guess in catching sight of a cooper’s hawk. 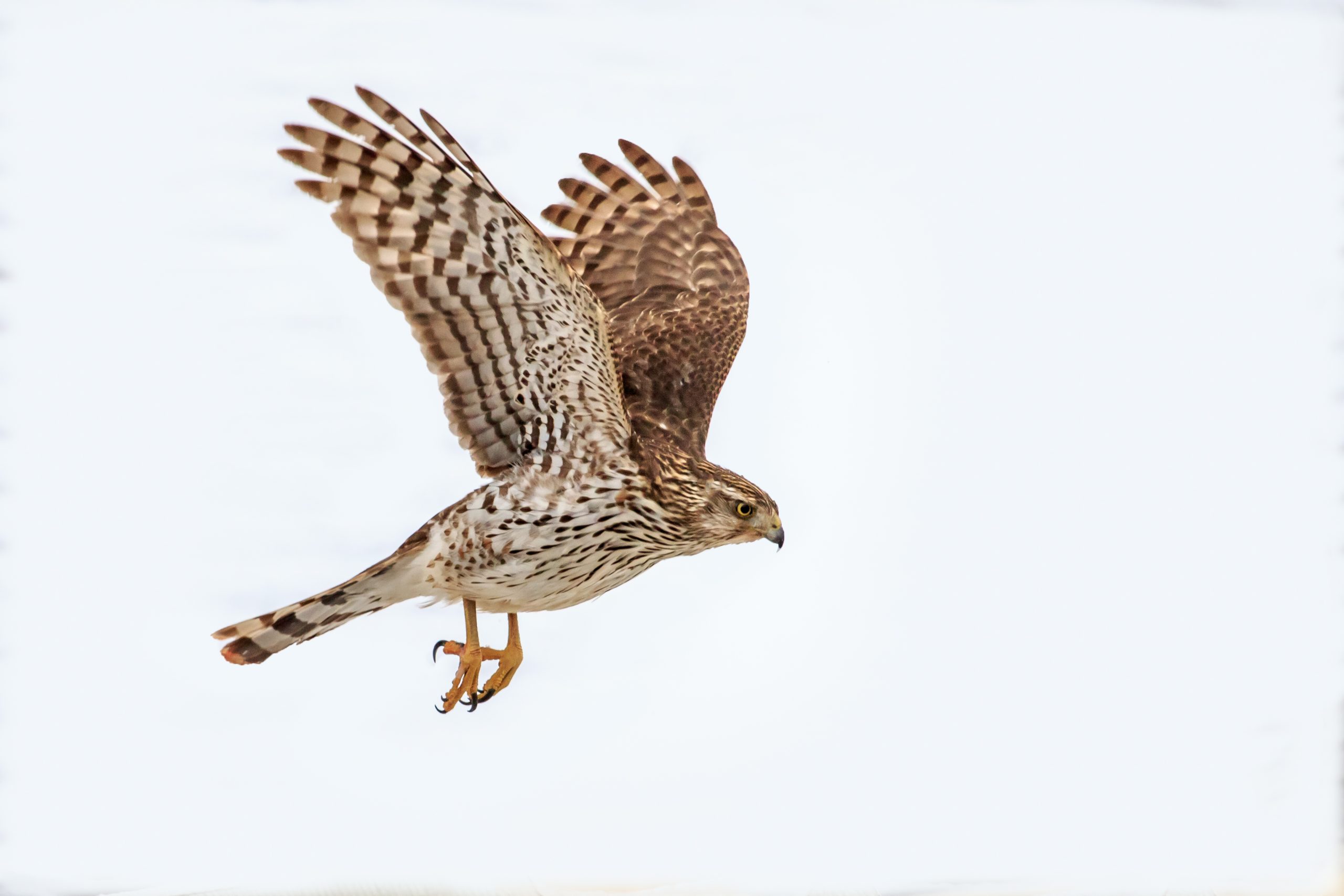 The cooper’s hawk is a raptor, which is to say, it’s a hunter who eats fellow vertebrates. The hawk’s short round wings are ideal for pursuing tasty creatures through the thick understory of the forest. They mostly eat other birds – but cooper’s hawks aren’t too picky. They eat doves, starlings, pigeons, robins, squirrels, chipmunks, chickens, grouse, pheasant, hares, mice, and bats. When in pursuit of their target, cooper’s hawks exude agility and power. They will hunt from both a perch and while in midair.

Often, they build nests in pines, oaks, firs, and spruces – preferably on trees growing on flatter land, as opposed to hillsides. Pairs will often return to the same tree as years previous, though they will build a new nest. The hawks build the nest 61-71 cm across, placed in a main crook of the tree – high up and well concealed. Try looking for these nests about 20-25 feet off the ground, where you may spot 2-4 fledglings if you’re lucky and it’s the correct time of year. 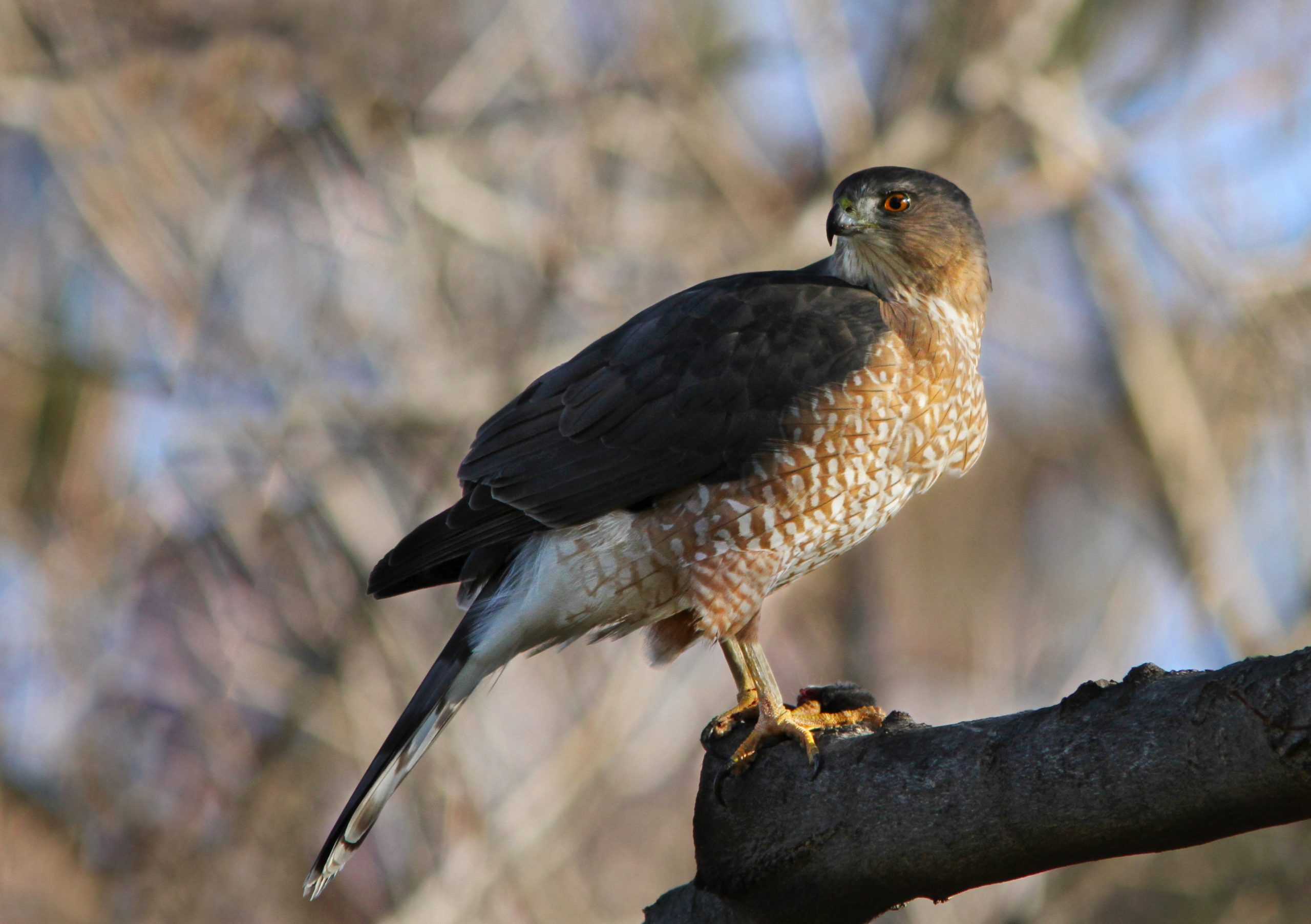 Cooper’s hawks are an early Accipiter in the evolutionary record – dating back in the found fossils up to 1 million years ago. In 1882, Charles Lucien Bonaparte bequeathed the name “cooper’s hawk” in honor of naturalist William Cooper, one of the founders of the New York Academy of Sciences.

However, people haven’t always celebrated the cooper’s hawk. Around the turn of the twentieth century, farmer’s considered cooper’s hawks or “chicken hawks” to be vermin and they were often killed. Farmers perceived this bird to be a formidable foe, endangering their chickens and other small-sized livestock.

In much of the world, birds (and hawks especially) are regarded as “good” or “bad” based on their dietary habits, and whether their appetites conflict with human enterprise. We are beginning to learn to evaluate species of animals and plants based on their effects on ecosystems and whether or not they are invasive to a particular landscape, or provide a much-needed role within a fragile ecosystem.

One Part Of A Fragile Ecosystem

Like so many other animals in our changing world, the cooper’s hawk has not been unaffected by loss of habitat and breeding grounds in the midst of development and a warming climate. It was considered an endangered species in the twentieth century, as the use of pesticides decimated populations around the time of WWII.

The species has since recovered dramatically. Partners in Flight estimates that there are around 700,000 of these hawks in North America today.