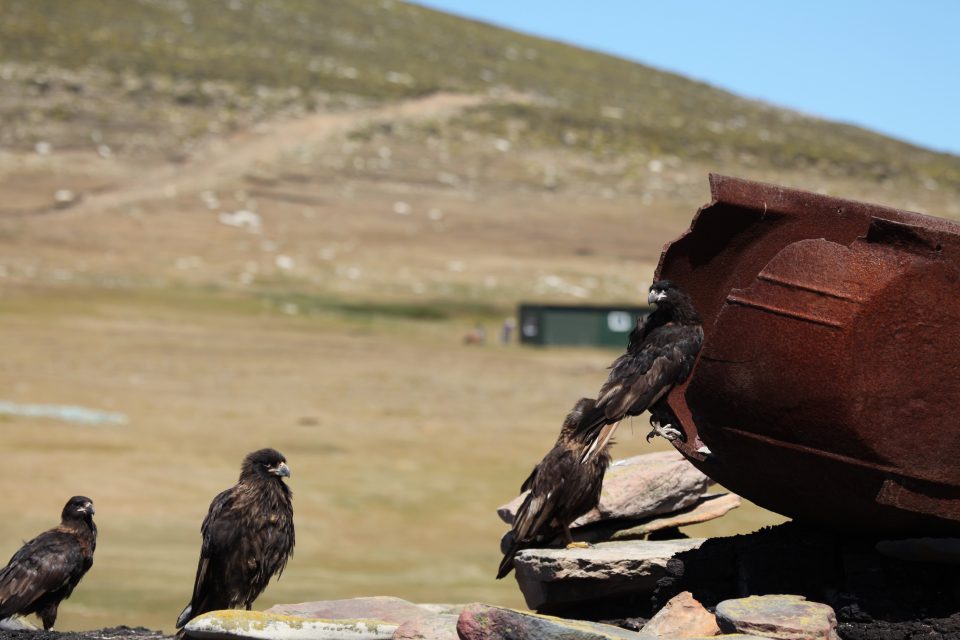 In the popular imagination, there are birds that flock and those that don’t. Gulls, sparrows, pigeons, even penguins fall into the former category. In the latter: woodpeckers, owls, and most of the raptors. While these rough distinctions are broadly accurate, as with any human-made categories there are exceptions.

Most species of raptor are indeed solitary, only pairing off for the breeding season and spending the rest of the year on their own. Though migratory species often aggregate to spectacular effect—see for example the “river of raptors” pouring through Veracruz, Mexico each winter—they aren’t necessarily social in way of a sparrow or gull. Of course, they interact, but their assembly is more a function of heading in the same direction than it is of dependence.

However, a number of hawks and falcons do in fact form complex social groups. The Eleonora’s falcon (Falco eleonorae), atypically, gathers to breed in enormous colonies on sea cliffs. Some, like the striated caracara (Phalcoboenus australis) of South America, appear to flock as a means of locating food. Others, like the Harris’s hawk (Parabuteo unicinctus), actually cooperate in raising young in groups of up to seven birds. In this way, they are similar to the least glamorous of the raptors, the vultures, who, as everyone knows, ride the thermals in their aerial surveys for carrion and descend en masse when they find it. Even some species of eagle gather around easy sources of food in the winter and at that time evince a loose and informal social hierarchy.

The Harris’s hawk—named for Edward Harris, a farmer who sponsored some of John James Audubon’s work —provides perhaps the most spectacular example of social behavior in raptors. This species forms fluid, multi-generational groups that not only participate in rearing offspring but actually hunt cooperatively, giving them the nickname “wolves of the sky.”

Groups are usually made up of parents and their fledged offspring but may also include unrelated birds. The group composition is fluid, with members from up to three neighboring groups participating. This social tendency makes them among the few raptors that actually form affectionate relationships with falconers; other birds used in falconry do not share their tendency toward sociality and thus have no impulse toward this type of bonding behavior.

Harris’s hawks displays a number of fascinating behaviors that demonstrate the sophistication of its social structure. Among the most striking is its propensity for forming towers. The birds literally climb on top each other while perched on already precipitous vantage points, presumably to gain better views of the surrounding terrain. From atop cacti and mesquite trees in the southwestern United States—Texas, New Mexico, and Arizona—and Central and South America, these birds scout out rodents and other small animals including birds and reptiles and descend en masse in pursuit.

This can be risky in the urban environments that the species increasingly inhabits. Electrical power lines seem like a perfect spot from which to survey the area, but can electrocute the birds unless they are properly modified. The birds also soar, gaining an even more expansive perspective. This combination of habits is reflected in their genus name, Parabuteo. Like buteos, a group that included the well-known red-tailed hawk (Buteo jamaicensis), they ride the air currents and like accipiters such as goshawks (Accipiter gentilis), they cruise deftly through narrow channels in the vegetation. Thus: Parabuteo, or near-buteo.

Once a potential meal is spotted, the whole group gets in on the action. Using the advantage of their aerial perspectives, they will flush their prey, cutting off its escape routes from multiple angles until it is cornered. The species has exquisitely tuned color vision per a 2018 study, undoubtedly an advantage in a monochrome desert habitat. Unlike many other raptors, they have no compunction about chasing meals on foot if the brush gets too dense for an aerial attack. Their long legs are perfectly adapted to stalking, an evolutionary echo of their probable ancestors, the theropod dinosaurs. Cooperative hunting allows the hawks to share the energy expended on capturing prey, as it does for mammalian social hunters such as lions and wolves. Typically, the dominant animals eat first, sometimes at the site of the kill and sometimes at the nest.

While the actual parents are more likely to brood the eggs and feed the young, subordinates may also take on some of these duties, giving them a break. This strategy sometimes allows Harris’s hawks to raise as many as three broods in a season, unusual for raptors.

A handful of other raptors pursue a social lifestyle. The Eleonora’s falcon (Falco eleonorae) breeds on Mediterranean coasts and islands in groups of up to 300.

The species converges on isolated islands in the spring and breeds on cliffsides then disperses to Madagascar and the Mascarene Islands along the East African coast. Though occasionally seabirds such as Cory’s shearwaters (Calonectris diomedea) nest among the Eleonora’s pairs, the species is known to run off other interlopers such as gulls. From their coastal perches, they swoop down on migrating passerines and other birds as they wing their exhausted way across the Mediterranean. The remains of these tattered pilgrims are stuffed into the gullets of the next generation of falcons.

Most other falcon species defend fairly large territories in pairs. While their colonial breeding habits are highly atypical, they do not otherwise appear to cooperate in any meaningful way. Pairs each raise their own young.

Another species, the African pygmy falcon (Polihierax semitorquatus), is sometimes polyandrous. These tiny falcons, which live in the spare rooms of sociable weaver (Philetairus socius) nests, will sometimes form avian thrupples, with two males supporting one female and helping to care for the young. This may be an adaptation to reduced nesting sites and to colder temperatures.

This type of partnership is standard for the Galapagos hawk (Buteo galapagoensis). As many as eight males may assist one female in raising a brood.

The striated caracara of the Falkland Islands and Tierra del Fuego gathers in enormous groups and functions much like the turkey vultures (Cathartes aura) with which it shares its territory and competes for food. Though the species takes live seabirds, especially young and eggs, it is particularly fond of carrion and will aggregate to feast on carcasses. Until the mid-20th century, eradication campaigns threatened the striated caracara due to its proclivity for making short work of vulnerable newborn lambs in coordinated group attacks.

In vultures, unlike other raptors, sociality is the norm rather than the exception. These scavengers frequently rely on social cues in order to locate carrion and, once at the carcass, observe a complex hierarchy that determines who feeds first. A turkey vulture raised in captivity and later released even guided wild vultures back to the San Diego Zoo, where it was raised, in hopes of sharing with them the food it was accustomed to receiving there.

Occasionally, normally monogamous species also engage in cooperative behavior: over a period of several years, a pair of bald eagles nesting on the Mississippi River opened up their relationship to include another male. The original male had done a poor job of assisting his mate in raising their young, but the addition of a second male to the equation resulted in successful fledging of several young, even after the probable death of the female. Such instances as this one—which is not unprecedented—testify to the behavioral flexibility of these highly intelligent birds.