What is Einsteinium? • Earth.com 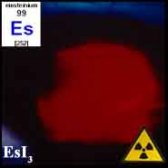 is a metallic synthetic element with the symbol Es and atomic number 99. It became the seventh transuranic (atomic number higher than 99) element produced. It was named for Albert Einstein. Es is an element found within the actinoid series which includes Actinium. Though it has only been produced in small amounts, it has been accurately determined to be silver in coloration. Like all synthetic elements, einsteinium isotopes are highly radioactive and are extremely toxic. Besides research, einsteinium has no known uses.

Einsteinium does not occur naturally. The process of creating it starts with irradiation of plutonium-239 in a nuclear reactor over a period of several years. This process produces plutonium-242 in the form of plutonium oxide and is then mixed with aluminum and formed into pellets. The pellets are also irradiated for one year in a nuclear reactor, after which another 4 months of irradiation is needed in a another reactor. The total process results in a mixture of californium and Es, which can then be separated.

Einsteinium was first recognized by Albert Ghiorso in 1952 of UC Berkeley. He was studying debris from the first hydrogen bomb test of November 1952. He discovered isotope einsteinium-253. His findings were not made public until 1955 due to tensions from the Cold War. More isotopes were produced at UC Berkeley using nuclear fusion reaction, then later with neutron irradiation of plutonium. In 1961, about .01 micrograms of Es-253 was produced which in turn was used to produce mendelevium. Roughly 1/10 thousandths of an ounce of einsteinium was produced over a 4 year period that started from about 105 ounces of plutonium.