How to Find Morel Mushrooms (and Avoid False Morels) • Earth.com 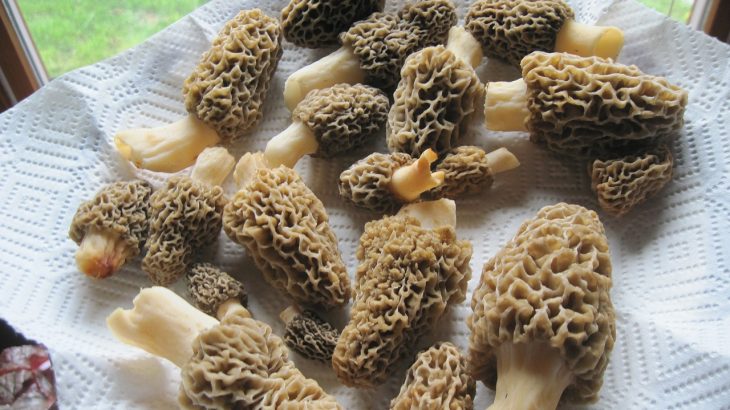 How to Find Morel Mushrooms (and Avoid False Morels)

Most tasty mushrooms fruit in summer and fall. Morels, however, come out at the beginning of spring.

Where, Oh Where, Are These Tasty Treats?

Mushroom hunters can be very secretive people. Don’t be offended if they avoid telling you their favorite hunting spot. Perhaps you can glean a little information from them, or if you’re lucky enough to have a friend into hunting, maybe they’ll take you along. If someone lets you tag along, try to be a good person and buy them gas. Do something nice for them, because they are passing on invaluable knowledge!

Anyways, morels mainly grow in the northern hemisphere. Areas with the largest harvests include North America, Turkey, China, and the Himalayas. Don’t look for morels in non-forested areas. They associate themselves with particular kinds of trees. Without those trees, there might be an occasional mushroom here and there, but not enough for a good harvest. When you find a morel in a forest, it’s good practice to stop and look around for a few minutes, because there are probably many more very close by. Please read guides and rules of harvesting before going out and trying this yourself. You don’t want to destroy the mushrooms!

In the eastern U.S., morels are most reliably found around ash, elm, sycamore, and hickory trees. They also associate with apple orchards, as well. If you find the mushrooms in orchards or near developments, be careful. Mushrooms are amazing because they can soak up chemicals and toxins in the environment. However, this is bad news if you want to eat them. Any chemicals used on the apple orchard will certainly be inside those mushrooms.

In the American west, morels prefer coniferous forests. You will find them in areas that are wet, but well-drained. Unfortunately for your skin and general peace of mind, the presence of mosquitoes is a good sign for morels. They also grow super well after a fire. More on that below.

Check out this cool map, which shows where morels were first spotted in different locations across the U.S. last year. 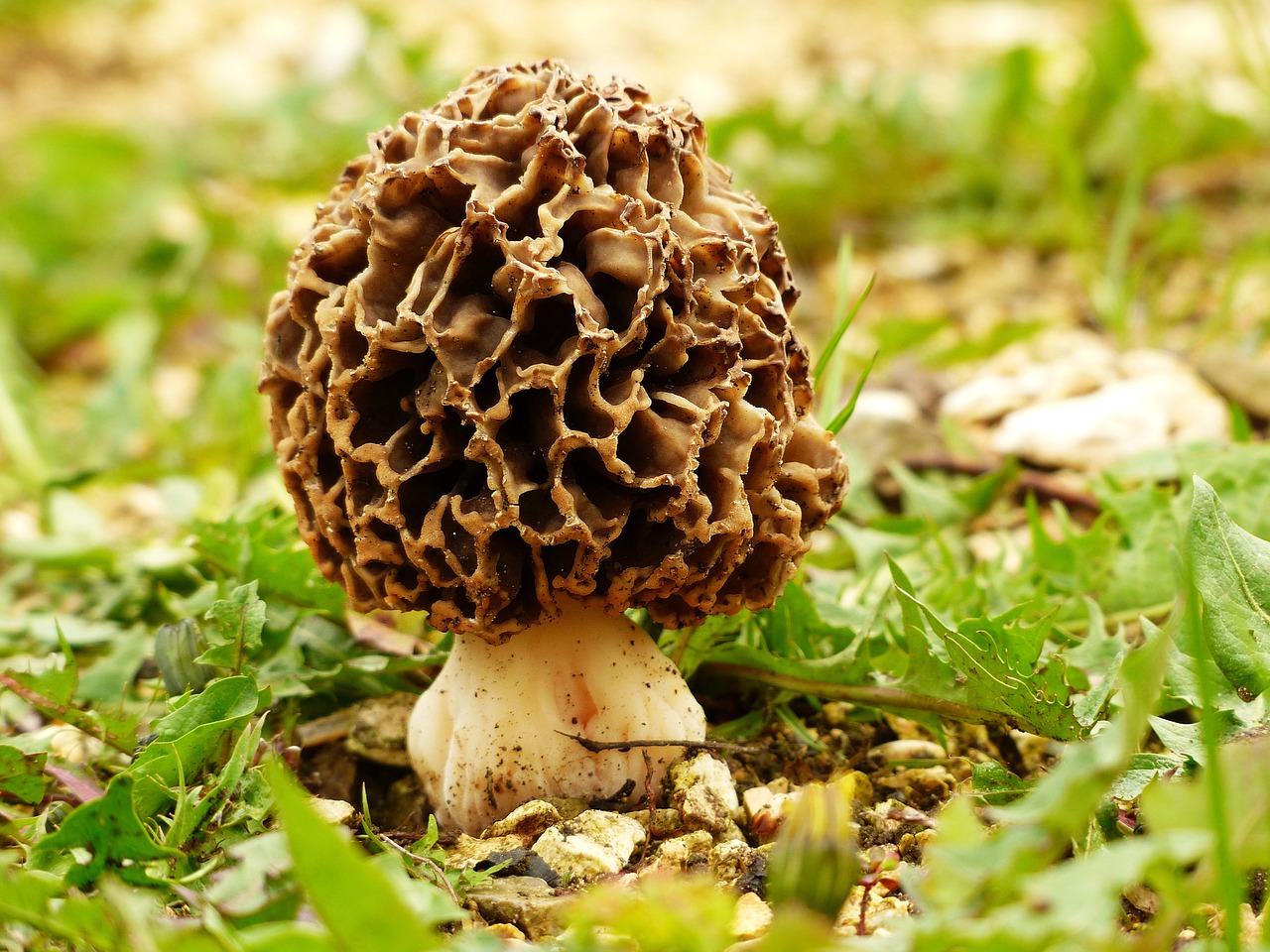 When Should I Get My Boots On and Go Hunting?

“When the oak leaves are as big as mouse ears” is one folksy piece of advice. In general, morels pop up just after buds burst on trees. While the relationship between morels and trees isn’t understood, some scientists think that the mushrooms use the sap flowing in the trees as some sort of cue to fruit. This sap begins to run as the trees start to photosynthesize, which is when they first stick their leaves out. It’s possible that the morels use the energy from this sap to make mushrooms, but no science has yet confirmed this. The soil temperature must be above 50°F for morels to fruit. After the first week with lows above 50 is a good time to check for morels. Also, use social media! There are probably some mushroom hunters in your area that will post their bounty as they ripen.

The season will begin on low-lying southern and western facing forests. As the weeks progress, morels will appear at higher elevations and on eastern and northern aspects. The morel season is typically a short one, but in good years successful hunters can find the mushrooms through mid-summer.

What’s the Deal About Fire?

Many mushrooms have a positive relationship with disturbance. Morels are one of these kinds of mushrooms. Be it fire, erosion, or logging, morels will come. Again, scientists don’t know precisely why morels associate with fire and other disturbances. One hypothesis is that the fire disrupts and breaks apart the mycelial network. This disruption could stress the fungus out, causing it to send much of its energy into making fruit. This way, if the mycelium eventually dies from the disturbance, it will have succeeded in its mission to produce spores to inoculate other areas.

If a fire rolled through your area (safely, I hope), search the following spring before the area greens up. Once grasses and bushes start to grow, it’s too late. The morels will fruit most heavily in areas on the edge of the fire, where the burn wasn’t as severe. Be sure to double-check ‘pine cones’ on the ground. They might be morels! Please remove seeds from your boots before visiting a recently burned area. These places can be easy for nasty, invasive weeds to take over. 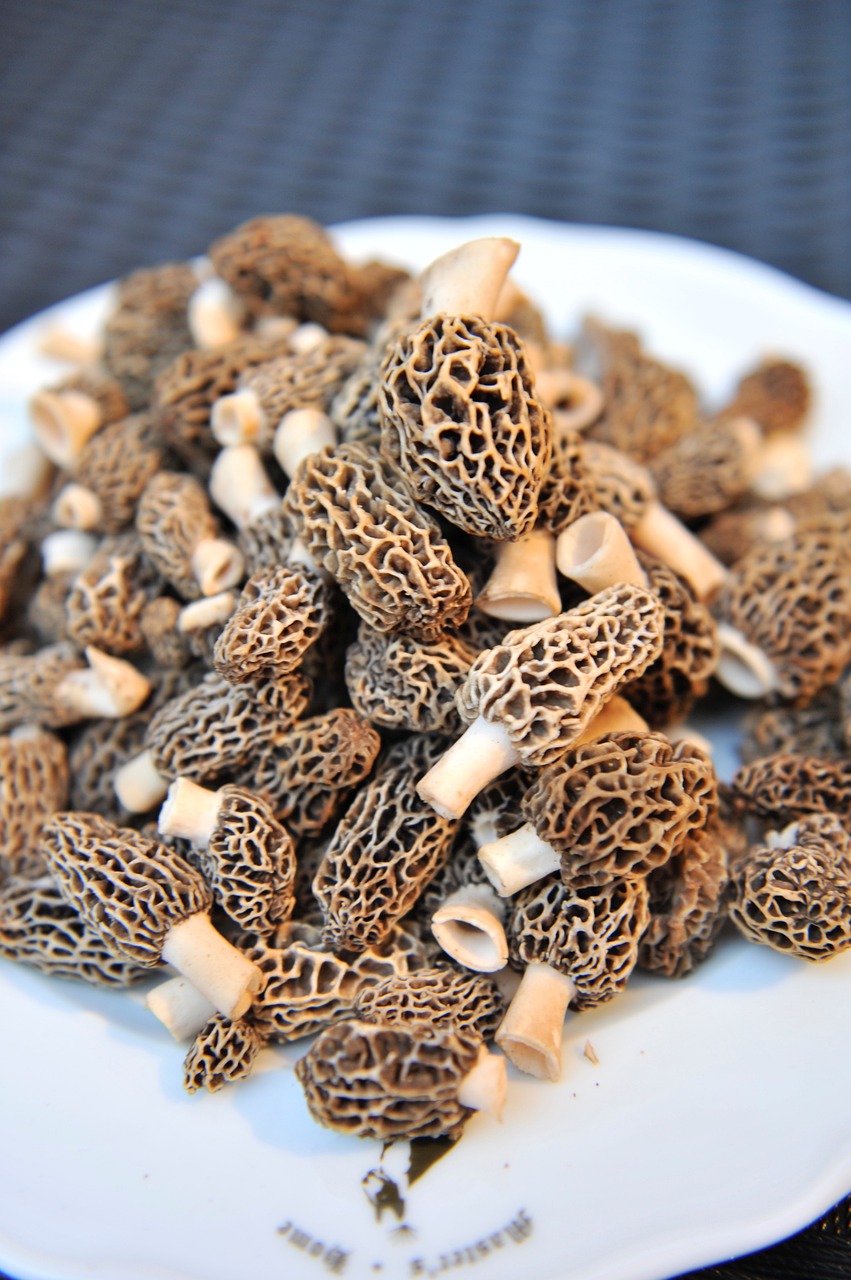 Tasty morels. Notice how the stems are totally hollow- one of the best tellers of a real morel.

How do you know if you have a morel? True morels, in the genus Morchella, have a completely hollow stem. This stem is hollow from the base to the very top of the mushroom. The cap has a characteristic, honeycomb pattern. They vary in color from blonde to black, typically beginning lighter and getting darker as the season goes on. The cap is longer than the stem. The cap also attaches to the stem at the base of the cap, as if it is fused on. If you care to do a spore print, the spores are creamy colored. 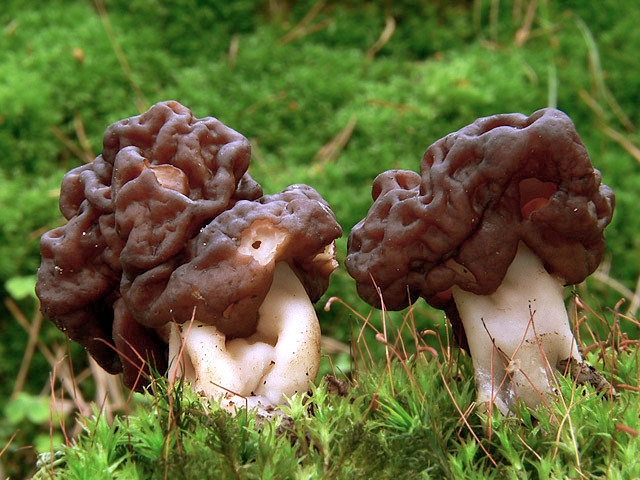 A false morel. Notice how the cap is wrinkled instead of honeycomb-shaped. Photo courtesy of Gljivarsko Drustvo Nis

…And How Not To Confuse Them With False Morels

Here are the two most distinguishing features between true and false morels (genus Gyromitra and Verpa). First, false morels have a cottony substance inside the stem. It will not be 100% hollow, like a true morel stem. Second, the caps hang freely on the top of the stem, rather than fused to the stem at the base of the cap. The caps of false morels have a more wrinkled, wavy appearance, rather than a cleaner, honeycomb structure. But beware, as with all plant and fungus identification, this can sound easy on paper. In reality, the lines are much more blurry, so it’s best to learn with a true mushroom hunter rather than relying solely on stuff you can find on the internet.

A fun fact about false morels in the genus Gyromitra is that they are considered delicacies in some areas. Monomethyl hydrazine (MMH) is the toxin in these mushrooms. Some areas around the Great Lakes and Scandinavia produce false morels with very low levels of MMH, making them edible. Definitely don’t test your luck on these guys, though. MMH is a potent toxin that has definitely killed people in the past. Yikes! 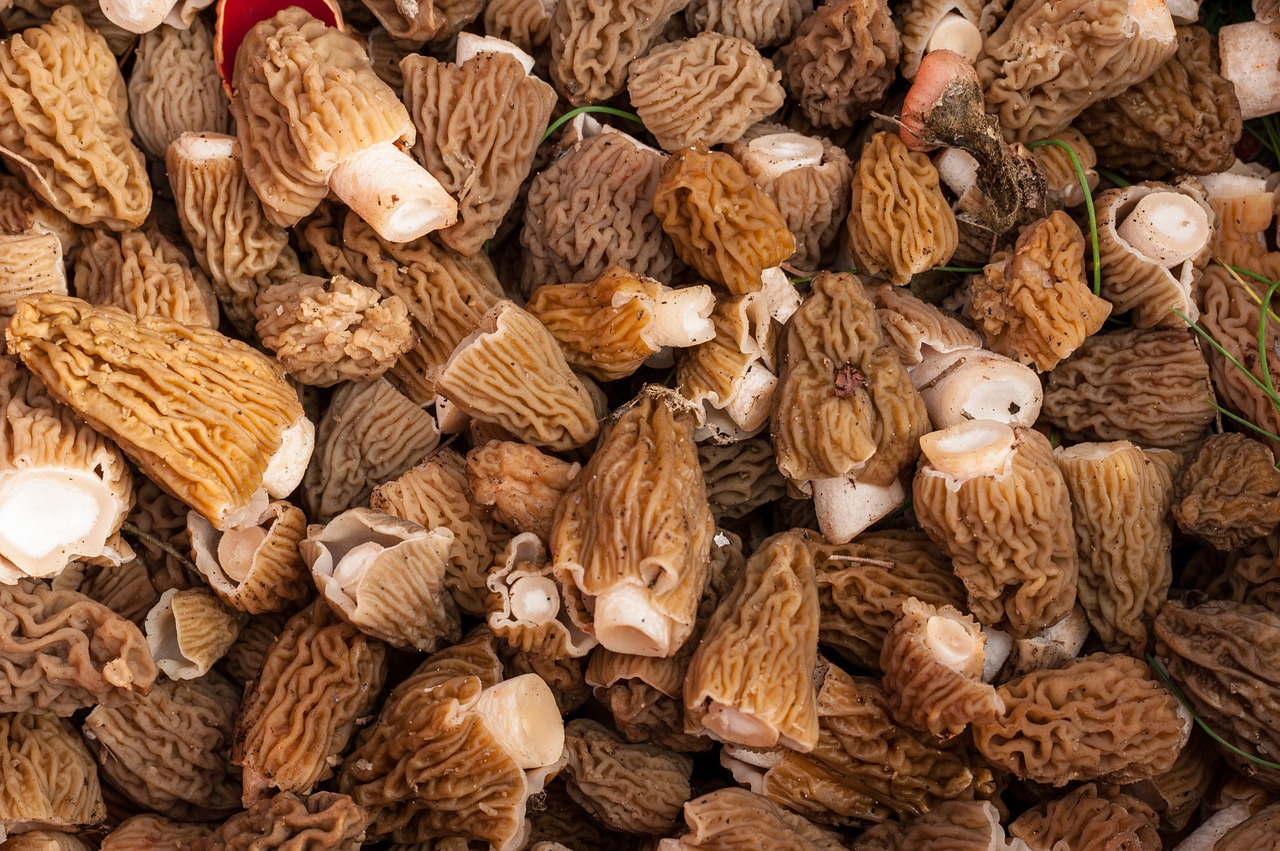 A pile of false morels. Look closely, and you can see how the cap hangs off the stem, rather than attaches at the base of the cap as in a true morel. Also, the stems aren’t hollow.

Most foodies agree- morels are best dried. Unlike chanterelles, which lose much of their flavor when dried, morels seem to age like fine wine. Dry them outside on a mesh rack if you live in a consistently sunny, dry place during morel season. If you don’t, you can always use a dehydrating kitchen appliance to dry out the mushrooms. Don’t bother cleaning off the mushrooms first, because the dirt, pine needles, and sand will fall off of the mushroom as it dries.

To reconstitute the mushrooms, just place them in a bowl of lukewarm water for about ten minutes. Then, sauté the tasty morsels in butter or oil and add them to pasta, pizza, or anything else that sounds good. As with other fancy mushrooms, don’t use too many flavors in the dish. The earthy taste of mushrooms can easily be lost among intense flavors, so simple is best.

When spring comes around, I hope you get outside and find a few of these good eatin’ mushrooms!