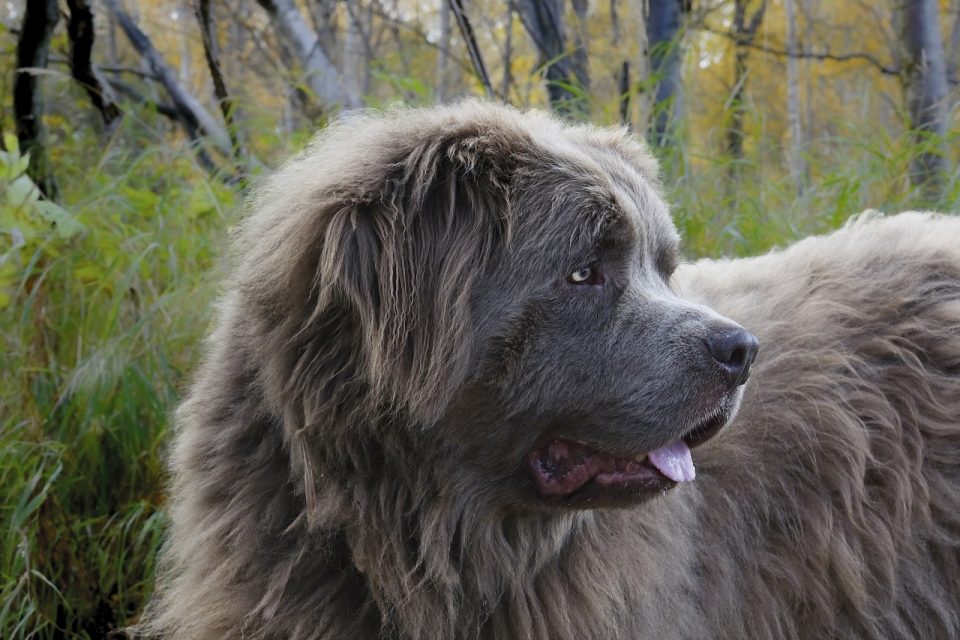 The Newfoundland dog is a giant breed that is hard to miss. This massive dog breed with black or dark brown fur is often mistaken for a bear and is considered the gentle giant of the dog world. Without a doubt, these are big dogs. As one of the largest breeds on earth, along with the Tibetan Mastiff and the Great Pyrenees, the male Newfoundland dog can weigh up to 150 pounds and stand 28 inches tall. Female dogs usually weigh a little less. They can live to be 10 years old and beyond if properly cared for. According to the American Kennel Club, their temperament is often sweet, patient, and devoted.

Considered regal, gentle, and quiet, Newfoundlands – or “Newfies” or “newfs” – do best with a lot of space, like most large dog breeds. Open fields, big suburban yards, long daily walks – these can be important aspects in creating a healthy environment for one of the largest friends you can have. It depends on the dog, but generally, Newfies romp around in snowbanks and love a good swim. Their thick coats are water-resistant and keep them insulated and help regulate their body temperature.

Early socialization is super important for this breed. Newfoundlands are generally in need of more companionship when compared to other breeds. If left alone for long periods of time, Newfies can get into trouble and develop unhealthy personality traits like separation anxiety, and may also develop health issues, such as gastric torsion or hip dysplasia.

Where exactly does this dog breed come from? It’s in the name! Newfoundland and Labrador is the easternmost providence in Canada, and it is the place of origination for Newfoundlands. Like many other working dogs (such as Landseers and Labrador Retrievers), Newfoundlands were bred for physically laborious tasks, especially on docks and boats. They were first described in the late 19th century by fishermen from Ireland and England.

Because the Newfoundland dog’s temperament is so relaxed, it is famously regarded as one of the best companion dogs (when they’re not covered in drool). But it doesn’t stop there – many people refer to the Newfoundland breed as the “nanny dog” because they are so good around children. The patient and watchful companion responds well to gentle guidance and often express a genuine affinity for kids.

It should be noted that while a Newfie’s love for children is well documented, all dogs are different and are still animals that can at times be unpredictable. This is especially true if a Newfoundland puppy has been left alone too much or without proper training. However, the same may be said for children who might not be very well trained on how to behave around dogs.

People didn’t exactly breed Newfoundland dogs to take care of children, however. The Newfoundland is a working dog and a water dog, for which they have webbed feet. Historically, it was a “ship dog”, working in the North Atlantic Sea. The dogs brought ropes ashore, retrieved lost fishing equipment, and also rescued humans in cases of emergency. Newfoundlands historically did other kinds of work too, such as pulling sleds in order to cart goods across various terrain. The dogs’ double coats (complete with water-resistant outer coats) and thick undercoats help them stay warm in cold climates.

Newfoundlands appear in a wide swath of literary classics, included “Jane Eyre” by Charlotte Bronte, in the journals of Lewis and Clark, and in the poem “Boatswain” by Lord Byron. One of the most beloved “nanny” dogs in popular culture is Nana, from J.M Barrie’s “Peter Pan”. This dog looked after Wendy, John and Michael Darling before Peter Pan swept them all away to Neverland. While the animated version of Peter Pan depicts Nana as a St. Bernard, biographers of J.M Barrie note that his own family dog was a Newfoundland, and was the inspiration for the story.

With such a sweet personality, bear-handsome good looks, and literary fame, what’s the drawback to owning a Newfoundland yourself? Well, for a lot of people, the biggest problem is the cost.

Most reputable breeders will sell a Newfoundland puppy for $1,000 – $2,000 dollars – and as many dog owners know, purchasing your furry pal is only the tip of the iceberg. For an owner in North America, for example, the average amount of money spent on a dog in the first year of ownership is over $1,200 dollars. After the first year of ownership, expenses can still rack up into the hundreds of dollars, and that’s if your dog stays healthy. Any health problems or accidents can bring on gut-churning bills that add up extremely quickly.

Other drawbacks? Newfoundland dogs are a giant breed and one of the heaviest shedding breeds around. They are “champion droolers” and due to their size, they obviously take up quite a bit of space. Not exactly ideal for apartment living. Also, expect to buy a lot more dog food than you would for a normal dog…Newfoundlands eat a lot of food.

Newfoundlands have a typical life span of 8-10 years, so you can expect to continue paying costs of vet bills, food, and any emergency care for that length of time.

With all of this in mind, Newfoundlands are still a delightful breed of dog that you might easily misidentify when out for a forest stroll. What are your experiences with Newfies? Any words of advice on everyone’s favorite bear dog?