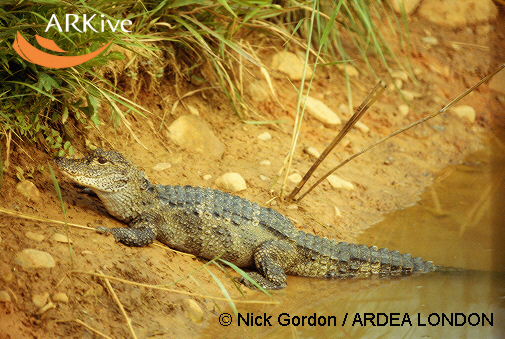 FWS Digital Media Library — The U.S. Fish and Wildlife Service’s National Digital Library is a searchable collection of selected images, historical artifacts, audio clips, publications, and video. The Chinese alligator, also known as the Yangtze alligator, China alligator, or historically the muddy dragon, is a crocodilian endemic to China. It and the American alligator are the only living species in the genus Alligator of the family Alligatoridae. Dark gray or black in color with a fully armored body, the Chinese alligator grows to 1.5–2.1 metres in length and weighs 36–45 kilograms as an adult. It brumates in burrows in winter and is nocturnal in summer. Mating occurs in early summer, with females most commonly producing 20–30 eggs, which are smaller than those of any other crocodilian.The species is an opportunistic feeder, primarily eating fish and invertebrates. A vocal species, adults bellow during the mating season and young vocalize to communicate with their parents and other juveniles. Captive specimens have reached age 70, and wild specimens can live to over 50.