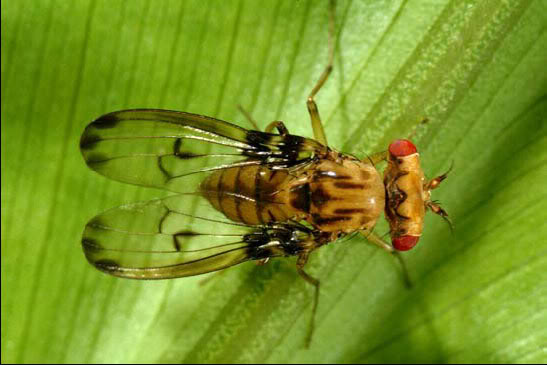 Drosophila heteroneura NatureServe Explorer Species Reports -- NatureServe Explorer is a source for authoritative conservation information on more than 50,000 plants, animals and ecological communtities of the U.S and Canada. NatureServe Explorer provides in-depth information on rare and endangered species, but includes common plants and animals too. NatureServe Explorer is a product of NatureServe in collaboration with the Natural Heritage Network. FWS Digital Media Library -- The U.S. Fish and Wildlife Service's National Digital Library is a searchable collection of selected images, historical artifacts, audio clips, publications, and video. The broad male head of the Hawaiian picture-winged fly Drosophila heteroneura is a novel sexual dimorphism that may be sexually selected and involved in behavioral isolation from D. silvestris . We found that males with broad heads are more successful in sexual selection, both through female mate choice and through aggressive interactions. These results indicate that the behavioral isolation between D. silvestris and D. heteroneura may be largely a consequence of the earliest stages of interactions. Further, silvestris is present on the northernmost volcano Kohala where heteroneura is lacking. Drosophila heteroneura prefers areas. In addition, there are several color-pattern differences, which give the overall impression that D. heteroneura is a lighter. the fly often experiences reproductive isolation. Despite barriers in nature, D. silvestris is able to breed with D. heteroneura to create hybrid flies in the laboratory.