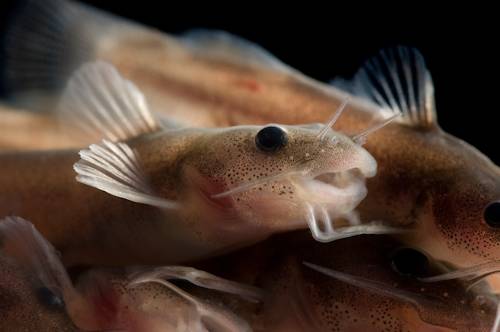 Noturus baileyi NatureServe Explorer Species Reports -- NatureServe Explorer is a source for authoritative conservation information on more than 50,000 plants, animals and ecological communtities of the U.S and Canada. NatureServe Explorer provides in-depth information on rare and endangered species, but includes common plants and animals too. NatureServe Explorer is a product of NatureServe in collaboration with the Natural Heritage Network. ITIS Reports -- Noturus baileyi ITIS (the Integrated Taxonomic Information System) is a source for authoritative taxonomic information on plants, animals, fungi, and microbes of North America and the world.The madtom is a small member of the family Ictaluridae, only reaching a maximum of 5 cm (2 in) long. It is olive brown on top with white to yellow below. Four saddles line the back of this species. FWS Digital Media Library -- The U.S. Fish and Wildlife Service's National Digital Library is a searchable collection of selected images, historical artifacts, audio clips, publications, and video. The Smoky Madtom has a slender body and a flat head, with the deepest point being beneath the dorsal fin. The body is olive-brown on the back. clear adipose fin without a dusky band and a white lower side. The Pygmy Madtom, Noturus stanauli, has a white-tipped snout