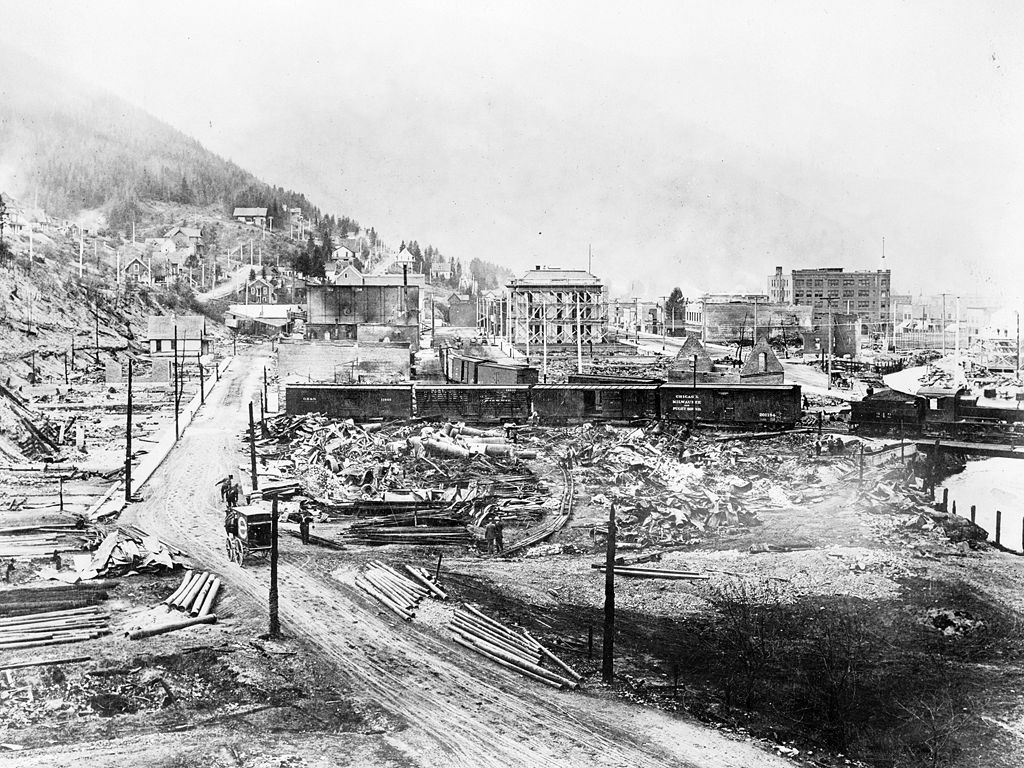 Also known as The Big Burn, The Fire of 1910 is believed to be the largest in history. The fire devastated 3 million acres across Washington, Idaho, and Montana. 87 people were killed, most of whom were firefighters. The cause of the fire has never been determined.

This Fire of 1910 (also commonly referred to as the Big Blowup, the Big Burn, or the Devil’s Broom fire) was a wildfire in the western United States that burned three million acres (4,700 sq mi; 12,100 km2) in North Idaho and Western Montana, with extensions into Eastern Washington and Southeast British Columbia, in the summer of 1910. The area burned included large parts of the Bitterroot, Cabinet, Clearwater, Coeur d’Alene, Flathead, Kaniksu, Kootenai, Lewis and Clark, Lolo, and St. Joe National Forests.

Therefore it burned over two days on the weekend of August 20–21,after strong winds caused numerous smaller fires to combine into a firestorm of unprecedented size. It killed 87 people, mostly firefighters, destroyed numerous manmade structures, including several entire towns, and burned more than three million acres of forest with an estimated billion dollars worth of timber lost. It is believed to be the largest, although not the deadliest, forest fire in U.S. history. The extensive burned area was approximately the size of the state of Connecticut.

In the aftermath of the fire, the U.S. Forest Service received considerable recognition for its firefighting efforts, including a doubling of its budget from Congress. The outcome was to highlight firefighters as public heroes while raising public awareness of national nature conservation. The fire is often considered a significant impetus in the development of early wildfire prevention and suppression strategies