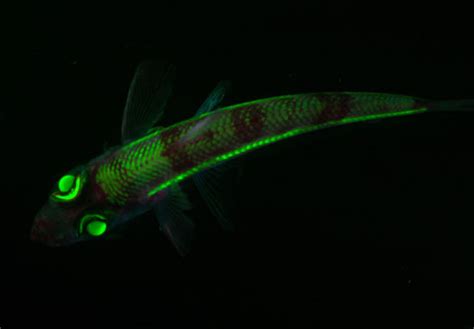 These named after their disproportionately large, iridescent (as well as fluorescent) eyes, greeneyes are slender fish with slightly compressed bodies.

Although the largest species, the Short nose green eye,  reaches a length of 40 cm (16 in), but most other species are much smaller.

Also their heads are small with large jaws. Their coloration ranges from a yellowish to blackish brown, and some species have cryptic blotches.

Like many aulopiform fish, green eyes are hermaphroditic; this is thought to be a great advantage in deep-sea habitats, where the chances of running into a compatible mate are uncertain.

Also young and larval green eyes are pelagic rather than benthic, staying within the upper levels of the water column.

Their fins are simple and spineless; aside from their eyes, some species also have iridescent patches covering their heads.

Bioluminescent creatures emit and produce their own light, whereas fluorescence is the emission of light by a substance—

not always living—that has absorbed light or other radiation of a different wavelength.

Animals use bioluminescence for many reasons including communication, but fluorescent creatures depend on the light to determine when they “glow.”