A large polynya in the Weddell Sea 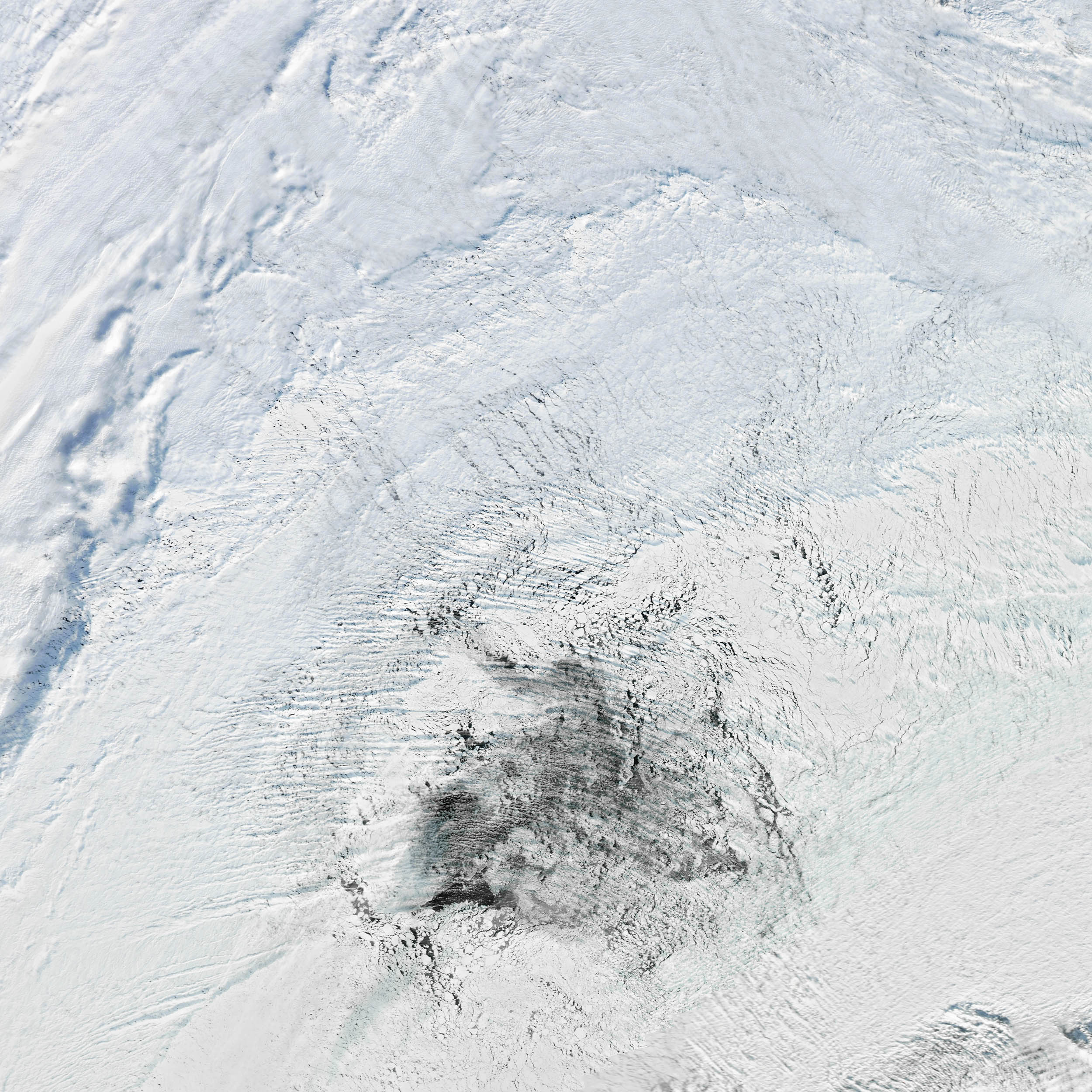 A large polynya in the Weddell Sea. In 1974, something strange occurred in the Southern Ocean. A large patch of open water formed amid the sea ice that rings Antarctica. The Weddell polynya, covering an area about the size of Oregon, opened up again each austral winter through 1976 and then filled in again. Its extent remains unrivaled.

Polynyas are areas of open water that form in the Arctic and Southern oceans where you would expect there to be ice cover. They occur frequently near the shore of Antarctica, where winter winds move ice away from the coast. In contrast, the Weddell polynya is a less-common “open-ocean” type that forms farther offshore, driven by the upwelling of warm water.

On August 14, 2016, the Moderate Resolution Imaging Spectroradiometer (MODIS) on NASA’s Aqua satellite captured this image of a large polynya in the Weddell Sea. The image was acquired during the Southern Hemisphere winter, when the air near the ocean surface is below freezing and the water is normally ice-covered.

“While smaller and shorter-lived than the 1970s Weddell polynya, it’s still an unusual and important phenomenon,” said Alek Petty, a sea ice scientist at NASA’s Goddard Space Flight Center. “It allows a significant amount of heat to escape to the winter atmosphere, where air temperatures are thought to hover around minus 20 degrees Celsius.”

After releasing heat into the air, the surface water becomes colder and denser, causing it to sink. The cycle continues until it is halted by warming spring air or the addition of lighter fresh water. Such circulation and mixing of water layers is key to keeping an open-ocean polynya open. It is also thought to play a role in producing cold Antarctic Bottom Water, which helps to drive the global ocean conveyor belt.

A number of scientists studied the Weddell polynya after it first appeared in passive microwave satellite imagery in the mid-1970s. NASA sea ice scientist Frank Carsey, now retired, wanted to better understand the polynya, why it formed, and what role it played. “I spent hours with a pile of satellite images of various sizes and scales,” Carsey said, “collected with early visible-light and IR sensors and stored in grey-toned hard copy.”

With the Weddell polynya now open again, additional insights might be made with the array of new observations available today. Many aspects remain a mystery. “Why was the Weddell polynya present in the 1970s, and then absent until its recent reappearance?” said Willy Weeks, a sea ice geophysicist (retired) from University of Alaska–Fairbanks. “Did the Weddell polynya occur before 1970, and we are looking at a periodic process that shows itself about every 40 years? If there were earlier occurrences, there is no record of them.”