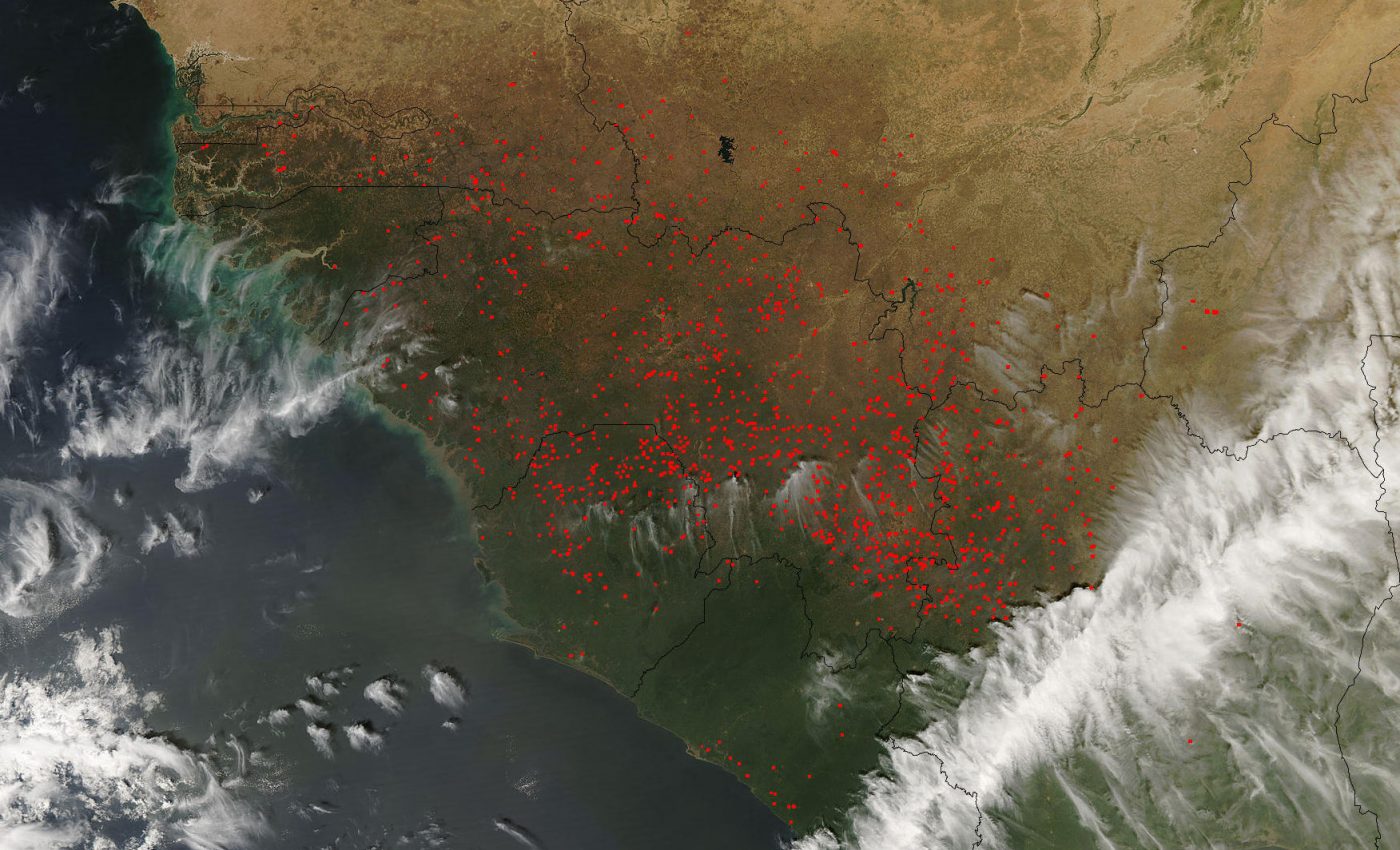 In the grasslands and savannas of West Africa, the agricultural burning season takes place in Northern Hemisphere winter. Fires are widespread at this time, as people burn crop stubble, brush, and old pasture grasses. This image shows hundreds of fires (red dots) detected by the Moderate Resolution Imaging Spectroradiometer (MODIS) on NASA’s Aqua satellite when it captured this image on January 10, 2008. Although it is not necessarily immediately hazardous, such large-scale burning can have a strong impact on weather, climate, human health, and natural resources.

West Africa is the westernmost region of Africa. The United Nations defines Western Africa as the 16 countries of Benin, Burkina Faso, Cape Verde, The Gambia, Ghana, Guinea, Guinea-Bissau, Ivory Coast, Liberia, Mali, Mauritania, the Niger, Nigeria, Senegal, Sierra Leone and Togo, as well as the United Kingdom Overseas Territory of Saint Helena, Ascension and Tristan da Cunha. The population of West Africa is estimated at about 381 million people as of 2018, and at 381,981,000 as of 2017, of which 189,672,000 are female and 192,309,000 male.The development of the region’s economy allowed more centralized states and civilizations to form, beginning with Dhar Tichitt that began in 1600 B.C. followed by Djenné-Djenno beginning in 300 B.C. This was then succeeded by the Ghana Empire that first flourished between the 9th and 12th centuries, which later gave way to the Mali Empire. In current-day Mauritania, there exist archaeological sites in the towns of Tichit and Oualata that were initially constructed around 2000 B.C., and were found to have originated from the Soninke branch of the Mandé peoples. Also, based on the archaeology of city of Kumbi Saleh in modern-day Mauritania, the Mali empire came to dominate much of the region until its defeat by Almoravid invaders in 1052.

Three great kingdoms were identified in Bilad al-Sudan by the ninth century. They included Ghana, Gao and Kanem.[28]

The Sosso Empire sought to fill the void, but was defeated (c. 1240) by the Mandinka forces of Sundiata Keita, founder of the new Mali Empire. The Mali Empire continued to flourish for several centuries, most particularly under Sundiata’s grandnephew Musa I, before a succession of weak rulers led to its collapse under Mossi, Tuareg and Songhai invaders. In the 15th century, the Songhai would form a new dominant state based on Gao, in the Songhai Empire, under the leadership of Sonni Ali and Askia Mohammed.