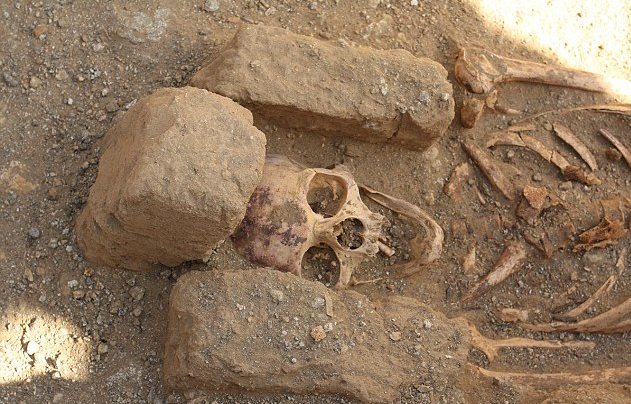 Today’s Image of the Day comes from an archeological excavation site in Sudan where a team of researchers has found four ancient monk cemeteries from 1,000 years ago.

According to the team from McMaster University, many of the skeletal remains found showed signs of “defleshing.” Various marks on the bones indicate that the skin had been removed shortly after death, although the reason why remains unknown.

So far, the team has excavated 123 skeletons from the ancient monk cemeteries, located not far from the Nile River.

One cemetery consisted only of adult males, most likely monks, while two others consisted of a wider mix of people. The fourth cemetery contained only 15 skeletons marked with strange features, including cut marks on the bones.

“All the indicators [are] that this happened when the bones were still quite fresh,” said Robert Stark who led the research team.

Other skeletons were found in mysterious configurations, including one whose legs were bent at a 45 degree angle with their arms covering their head.

Artur Obluski, director of excavations at the site, told LiveScience that in all four cemeteries were stone structures engraved with Greek writings consisting of two parts. The first, a set of prayers that ask “that the soul will be taken care of and can rest on the bosom of Abraham, Isaac, and Jacobor in the world of the living.” The second part contained “some individual information of the deceased: his name, age at the time of death, sometimes titles he bore during his lifetime – so-called cursus honorum- and professions he performed.”