Ash and Steam from Sarychev Peak 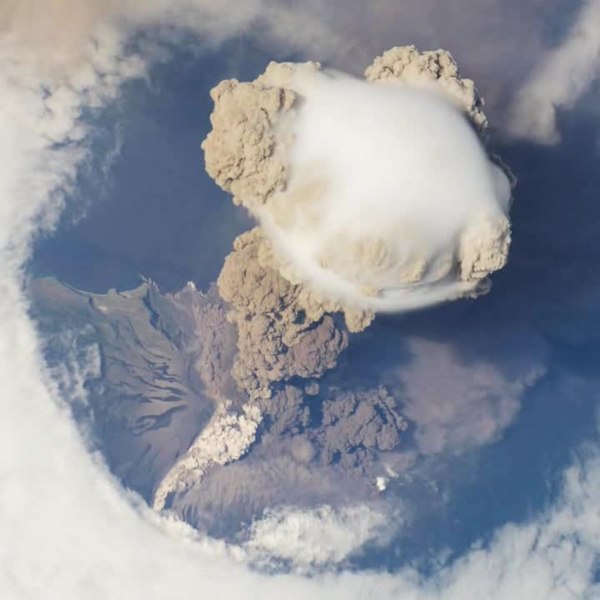 Ash and Steam from Sarychev Peak Plumes of ash and steam from Sarychev Peak blew in a counterclockwise direction across the Sea of Okhotsk on June 16, 2009. The Moderate Resolution Imaging Spectroradiometer (MODIS) on NASA’s Aqua satellite captured this photo-like image the same day, at 2:40 p.m. local time (2:40 a.m. UTC).

Sarychev’s plume appears to have a dual nature.

A large amorphous brown cloud, likely deriving its color from volcanic ash, appears in the east and north, forming the outer arc of the plume. The inner arc of the plume apparently derives its color from water vapor. Bright white puffs emanating from the pinpoint of the volcano hover over the brown cloud, casting shadows onto the plume below. In the west, the volcanic plume appears to mingle with clouds.

Sarychev Peak (Russian: вулкан Пик Сарычева, Vulkan Sarycheva, variants: Japanese: 芙蓉山 Fuyō Mountain,  Fuyō-san, Fuyō-yama,  Fuyo-zan,  Huyō San, Japanese: 松輪富士 Matsuwa-fuji),  is a stratovolcano covering almost the entirety of Matua Island in the Kuril Islands, Russia. It is a young, highly symmetrical stratovolcanic cone. A volcano is a rupture in the crust of a planetary-mass object, such as Earth, that allows hot lava, volcanic ash, and gases to escape from a magma chamber below the surface.