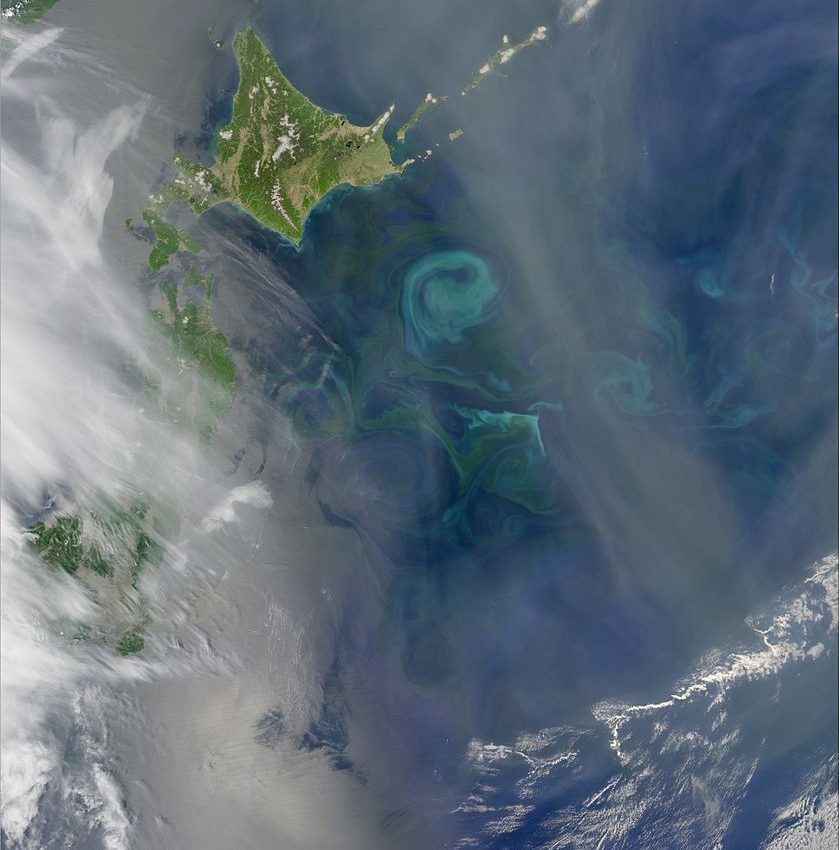 Spring Bloom Colors the Pacific Near Hokkaido. In the northwest Pacific Ocean, the Oyashio Current flows down out of the Arctic, past Siberia and the Kamchatka Peninsula. Around the latitude of Hokkaido, Japan, it begins to veer eastward and converges with the warmer Kuroshio Current, flowing into the area from the south.

This image from the Moderate Resolution Imaging Spectroradiometer (MODIS) on NASA’s Aqua satellite from May 21, 2009, illustrates how the convergence of these two currents affects phytoplankton (the microscopic plant-like creatures that form the base of the marine food web).

When two currents with different temperatures and densities (cold, Arctic water is saltier and denser than subtropical waters) collide, they create eddies. Phytoplankton growing in the surface waters become concentrated along the boundaries of these eddies, tracing out the motions of the water. The swirls of color visible in the waters southeast of Hokkaido (upper left), show where different kinds of phytoplankton are using chlorophyll and other pigments to capture sunlight and produce food. The bright blues just offshore of Hokkaido may be churned up sediment, rather than phytoplankton.

During the spring bloom season, nutrients are abundant in the surface waters. (The water has been “resting” all winter, when light levels were too low—and storms were too frequent—to support phytoplankton growth). But as the phytoplankton deplete the available nutrients, the bloom will taper off. At this stage, the eddies in the convergence zone can give a boost of nutrients at the surface because they don’t just circulate the surface water; they also produce upwelling. The upwelling can draw nutrient-rich water up from deeper in the ocean, allowing smaller blooms to occur later in the growing season.

The washed out appearance of the image at lower left is from sunglint—the (blurred) mirror-like reflection of the Sun off the water. At upper right, a plume of haze, perhaps smoke from fires in Mongolia and Russia, cuts across the scene.