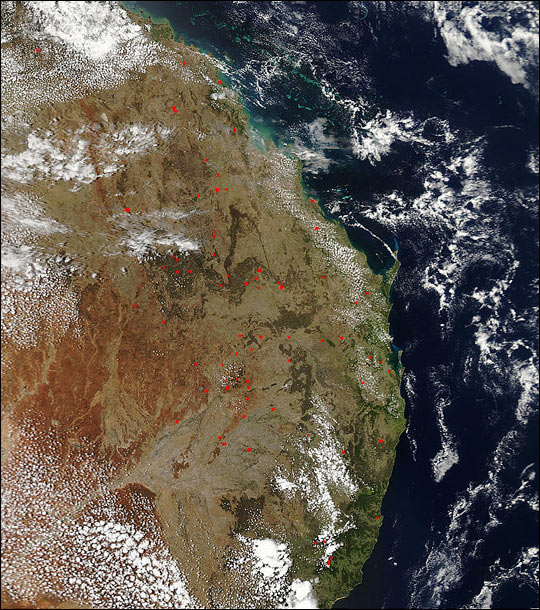 Biomass Burning in Eastern Australia. It has suffered through one of the most severe droughts in its recorded history over the past few months. Therefore the Compounded by a strong El Nino, the dry season has resulted in major crop losses and widespread wildfires across the continent. This Moderate Resolution Imaging Spectroradiometer (MODIS) image of eastern Australia shows active fires (red dots) burning on January 7, 2003.

The eastern states of Australia are the states adjoining the east coast of Australia. These are the mainland states of Victoria, Queensland, and New South Wales. Although the Australian Capital Territory and Jervis Bay Territory, while not states, are also included. The term usually includes the island state of Tasmania. On some occasions, the state of South Australia is included in this grouping.

Biomass Burning in Eastern Australia has caused serious damage to the country and has burned and taken down a lot of the city. Therefore the imaging had to be taken from satellite view. Also The dry season haws approached and will cause the storms this side of the country is bound to experience. Although the crops will be lost.