Blooms In The Sea Of Marmara 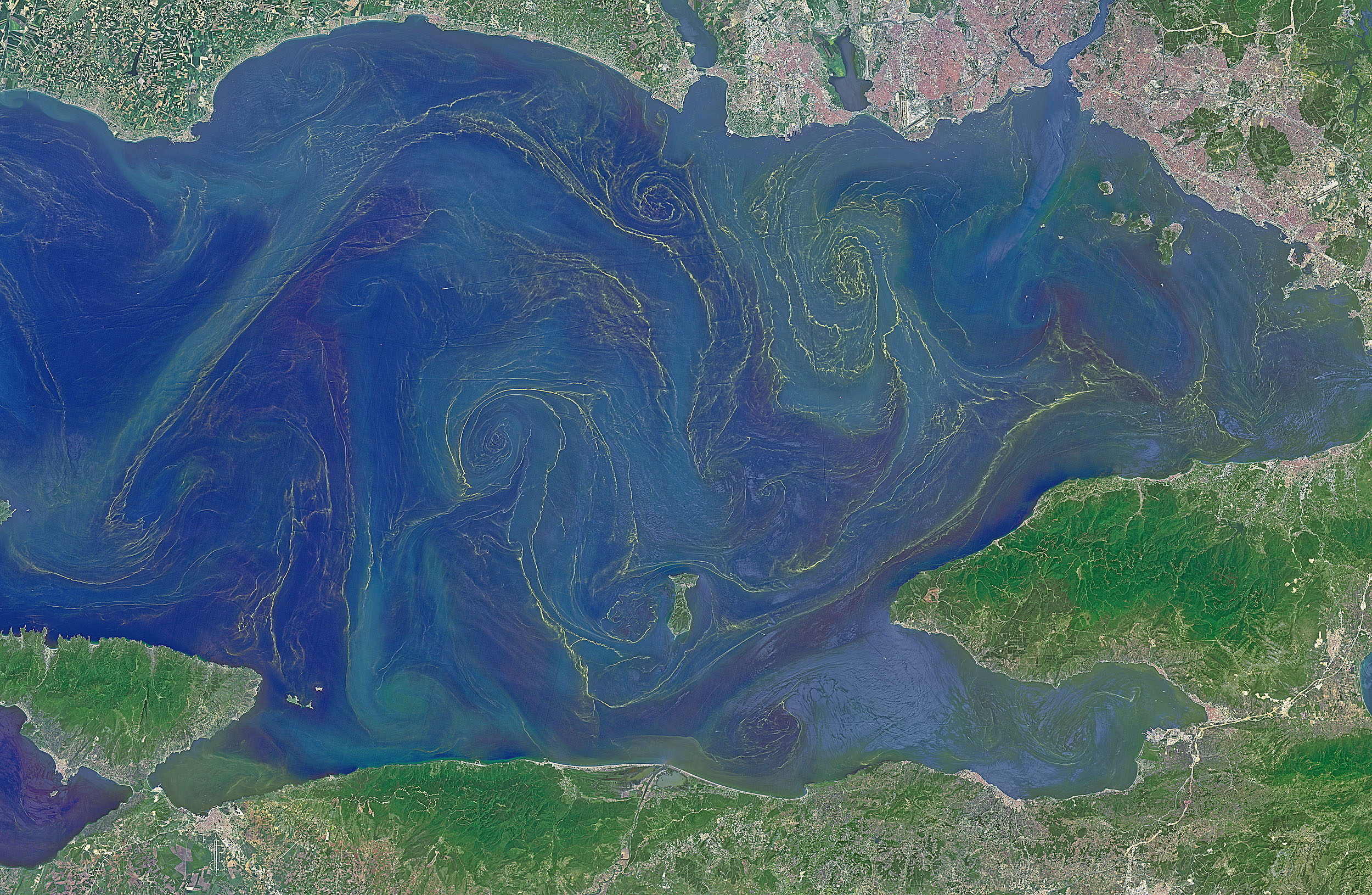 Blooms In The Sea Of Marmara. Situated between the Black Sea and the Aegean Sea, the Sea of Marmara is full of a rich soup of nutrients and life and surrounded by a rich history of civilization. Like the Black Sea to its northeast, the Marmara has an unusual layered structure with fresher water near the surface and much saltier water near the bottom. That fresh surface is fed by exchanges with the Black Sea and by flows from the Susurluk, Biga, and Gonen Rivers. The fresh water (just two thirds the salinity of the ocean) makes it easier for floating, plant-like organisms—phytoplankton—to grow, as does the abundance of nutrients pouring into the seas from European and Turkish rivers.

The Operational Land Imager on the Landsat 8 satellite captured this image of a phytoplankton bloom in the Sea of Marmara on May 17, 2015. The sea is surrounded on all sides by the nation of Turkey. The swirling shapes on the water are phytoplankton, with the yellow-green and red-purple filaments likely (but not necessarily) representing different species.

Those wavy colored lines not only show where the densest concentrations of plankton are floating, but also reveal the eddies and currents within the small sea. Waters rushing in through the narrow Bosphorous Strait (at Istanbul) and Dardanelles Strait (off the left side of the image), as well as a jagged coastline and tectonically fractured seafloor on this edge of the Asian and European continents, all conspire to create intricate mixing patterns. If youdownload the large image and open it in full resolution, you also can see ship tracks crossing the bloom lines.

“I often see features in imagery and wonder: what could be causing that?” said Norman Kuring, an ocean color specialist at NASA Goddard. “Remote sensing is great for the big picture, but it still needs data from the surface for validation and interpretation.”

According to scientists Baris Salihoglu of Turkey’s Institute of Marine Sciences and Ahsen Yuksek of Istanbul University, the blooms in the satellite image are mostly Prorocentrum micans and Noctiluca scintillans. They recently sampled the waters of the Marmara and found that Prorocentrum bloomed first, though Noctilucaeventually dominated.

According to Ajit Subramaniam of the Lamont Doherty Earth Observatory, both species are dinoflagellates, known to discolor the water (red tides). Neither is directly toxic to humans, but they can kill marine life by becoming caught in fish gills, depleting the sea of oxygen, or excreting ammonia into the water. “Noctiluca is phagotrophic—a really interesting beast since it eats other phytoplankton that can then change its color,” Subramaniam noted. “It switches from being photosynthetic to becoming heterotrophic.”