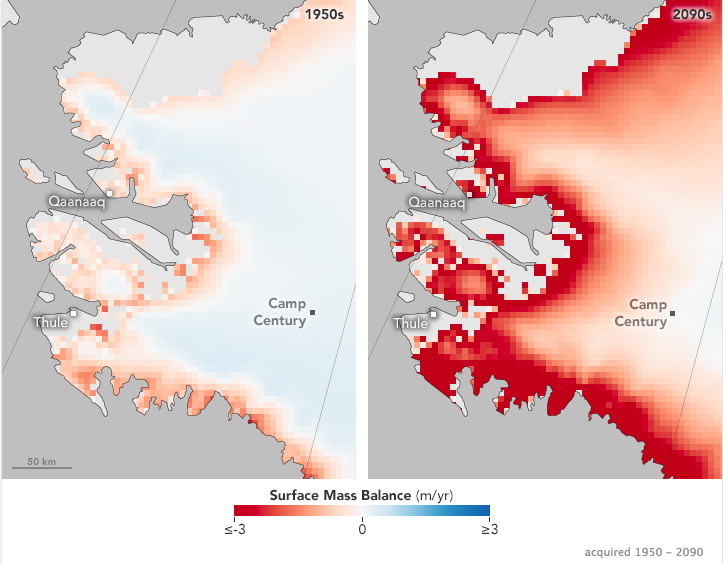 Today’s Image of the Day comes courtesy of NASA Earth Observatory and showcases the rapidly changing conditions in the Greenland ice sheet at Camp Century.

Camp Century was originally constructed in the 1950s during the Cold War under the codename Project Iceworm. It was intended as a secret U.S. nuclear missile launch site in the event of nuclear war with the Soviet Union.

However by 1966, unstable ice conditions caused the cancellation of the nuclear project. Instead, Camp Century was used to store waste under the expectation that ice and snow would continue to accumulate. The assumption was that the frigid conditions would seal both the aborted military base, along with toxic waste.

But according to a new study published in Geophysical Research, the foundation of ice and snow at Camp Century could melt away by the end of this century. As a result, waste that has been buried for decades would be exposed, introducing an unknown quantity of toxins into the surrounding environment.

The study estimates that 53,000 gallons of diesel fuel and 24,000,000 liters of wastewater (including sewage) are buried beneath Camp Century. Even worse, the site also stores unknown levels of radioactive waste and polychlorinated biphenyls (PCBs). Even before the surface ice melts, liquid meltwater could pick up the PCBs and spread them deeper into the ice.

According to the study’s lead author, William Colgan, Camp Century will surely be exposed if nothing is done to slow global warming.

According to Colgan, the question is not “how are we going to adapt to this and start talking about what to do in 2090. This is just one in a very long list of reasons to say: how do we try and mitigate climate change now?”