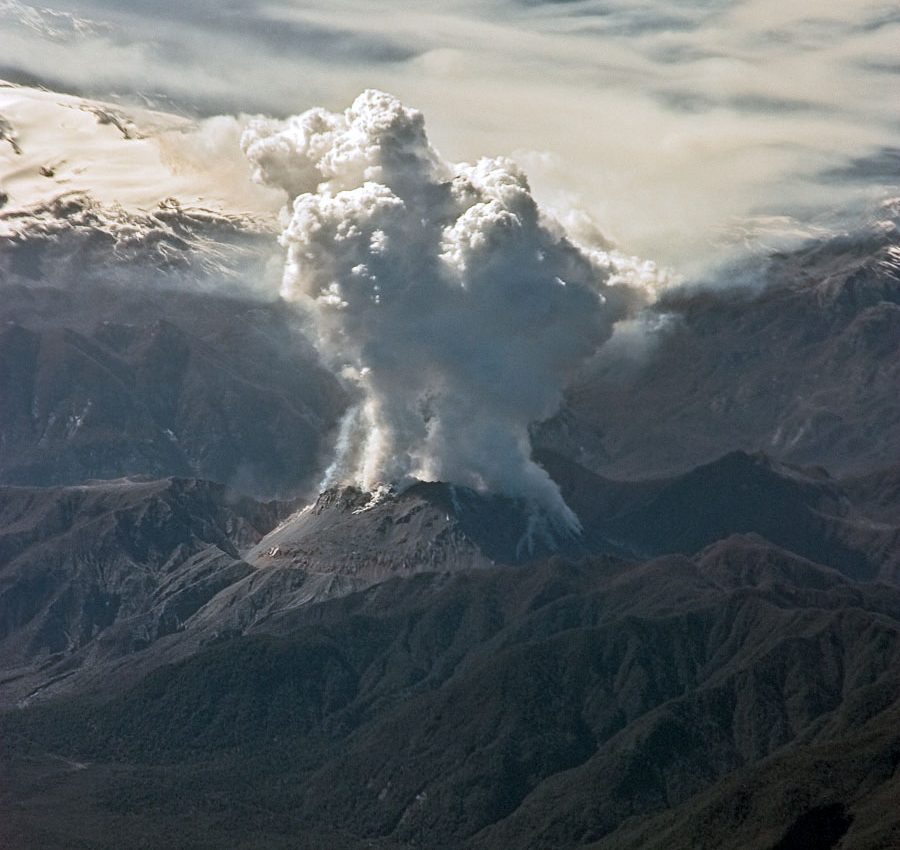 On May 2, 2008, Chile’s Chaitén Volcano erupts, blanketing the region in volcanic ash, and releasing plumes of ash and steam for several weeks. In the months that followed, the volcano continued intermittent activity. In early September, Chaitén released another plume. The Moderate Resolution Imaging Spectroradiometer (MODIS) on NASA’s Aqua satellite captured this image on September 3, 2008.

In this image, Chaiten Volcano Erupts the volcanic plume wafts away from the volcanic summit, tracing a vague zigzag pattern toward the northwest. The plume can be distinguished from the nearby clouds thanks to its slightly darker color, caused by volcanic ash mixed with water vapor. Unlike the soft, fluffy ash from burning vegetation, volcanic “ash” really consists of tiny jagged particles of rock and glass.

Chaitén is a caldera volcano formed when the magma chamber beneath a volcano completely empties during an eruption, causing the summit to collapse into it.

The collapse creates a circular depression. Prior to its May 2008 eruption, the volcano had been dormant for more than 9,000 years.Chaitén is a volcanic caldera 3 kilometres (2 mi) in diameter, 17 kilometres (11 mi) west of the elongated ice-capped Michinmahuida volcano and 10 kilometres (6 mi) northeast of the town of Chaitén, near the Gulf of Corcovado in southern Chile. The most recent eruptive phase of the volcano erupted on 2008. Originally, radiocarbon dating of older tephra from the volcano suggested that its last previous eruption was in 7420 BC ± 75 years. However, recent studies have found that the volcano is more active than thought. According to the Global Volcanism Program, its last eruption was in 2011.