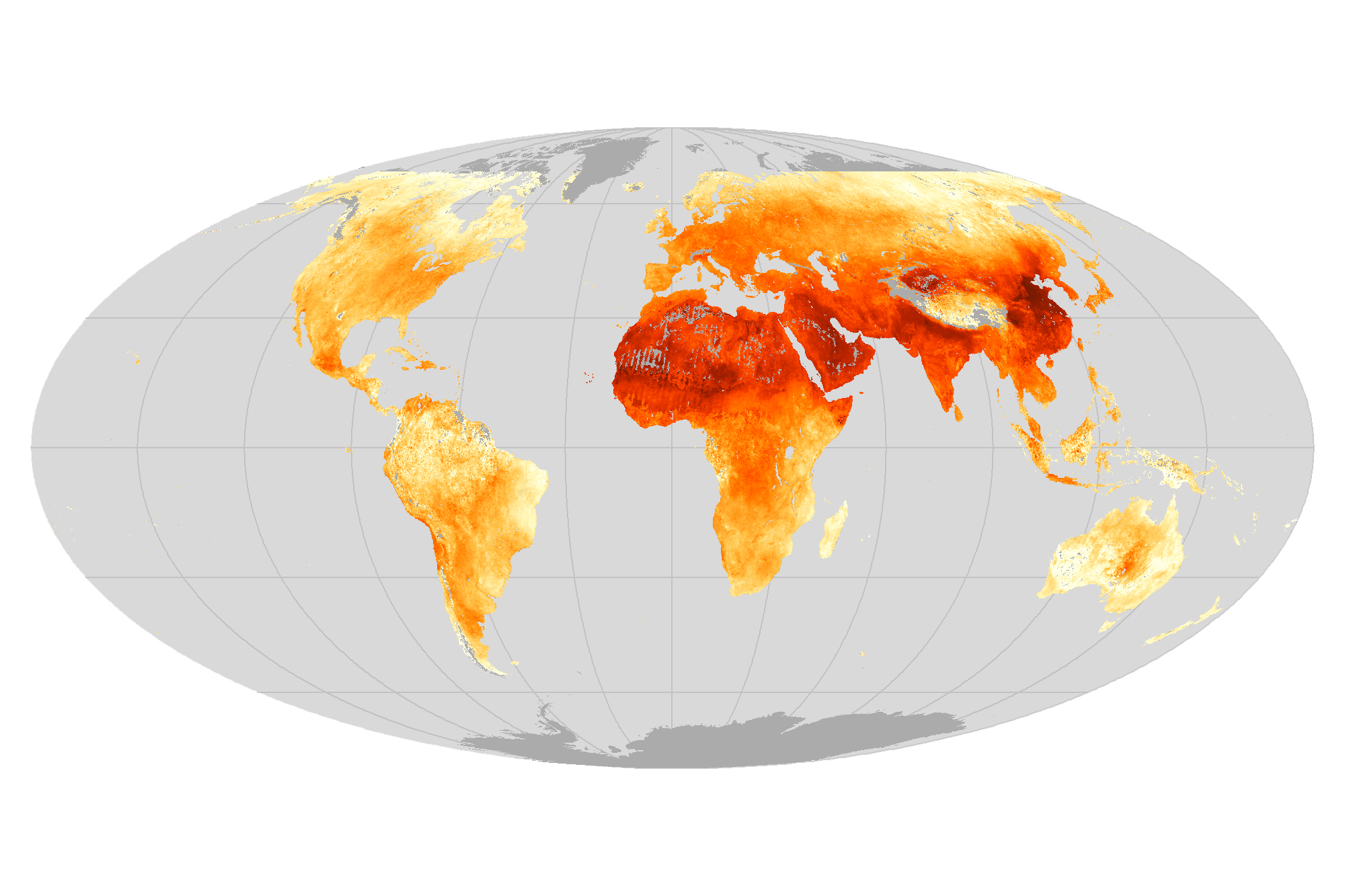 Changing Views of Fine Particulate Pollution. People living in polluted areas inhale vast quantities of fine particulate matter, which is called PM2.5 because the pollution particles have diameters less than 2.5 micrometers. Such particles are so small—30 times smaller than the width of a human hair—that they can easily infiltrate human respiratory and circulatory systems, contributing to health problems like asthma, pulmonary vascular disease, and heart attacks. NASA view of the pollution.

But how widespread are the health consequences of fine particulates? Where is the greatest threat to health? To what extent is that threat changing? Answering questions like these has long been a challenge for atmospheric scientists and the medical community because there is no reliable way to measure PM2.5 on a global scale using ground-based sensors alone. The United States and Europe have many ground-based monitoring stations, but large swaths of Africa, Asia, Central America, and South America are largely unmonitored. As a result, there have historically been gaps in global assessments of the health effects of PM2.5, particularly for rural populations. Changing Views of Fine Particulate Pollution.

Satellites offer a potential solution. Every day they can gather global views of industrial pollution, smoke, dust, and other aerosol particles in the air. But monitoring air pollution with satellites poses its own set of problems. Satellites look down through the entire column of the atmosphere, and distinguishing between particles high in the air and those near the surface—the particles people breathe—can be quite challenging. In addition, clouds can block satellite observations. And of the several sensors in orbit that can detect airborne particles, each sees them in slightly different ways.

Nevertheless, in 2010, a team of researchers from Dalhousie University were able to publish the first long-term satellite-based estimate of PM2.5 by combining data captured between 2001 and 2006 by two sensors—the Moderate Resolution Imaging Spectroradiometer (MODIS) and the Multi-angle Imaging SpectroRadiometer (MISR)—and additional information provided by an atmospheric model called GEOS-Chem.

“The map that we produced in 2010 clearly demonstrated that satellites can make a valuable contribution to our understanding of PM2.5 exposure on a global scale, but the uncertainties limited their global application to a single long-term average,” said Aaron van Donkelaar, one of the Dalhousie researchers. “We knew that, with some improvements to our techniques, satellites could provide a great deal more insight still.”

In the five years since, teams of researchers from several institutions have done just that, developing new techniques that allow satellite estimates of PM2.5 to be more accurate and to cover longer time periods. For example, some scientists found ways that allow information collected by other sensors—notably SeaWIFS and CALIOP—to be integrated into the analysis. Other researchers developed new techniques for comparing satellite and ground measurements to make the interpretation of satellite observations more accurate. Others have made improvements to the GEOS-Chem model, improving the quality of the simulated separation between particles at the top of the atmosphere from those closer to the surface.

The Dalhousie team also has more data to work with now than they did in 2010—enough to produce a reliable record of global satellite-based PM2.5 that ranges from 1998 to 2012. Even during that short period, significant changes are visible. The map at the top of this page shows mean PM2.5 exposure for the period between 2010 and 2012; the lower map shows PM2.5 mean exposure for 1998 to 2000. While pollution levels have declined in North America and Western Europe, they have increased significantly in East and South Asia. Averaged together, the worsening PM2.5 pollution in Asia outweighed the improvements in North America and Europe, and global PM2.5exposure have increased by an average of 2.1 percent per year.