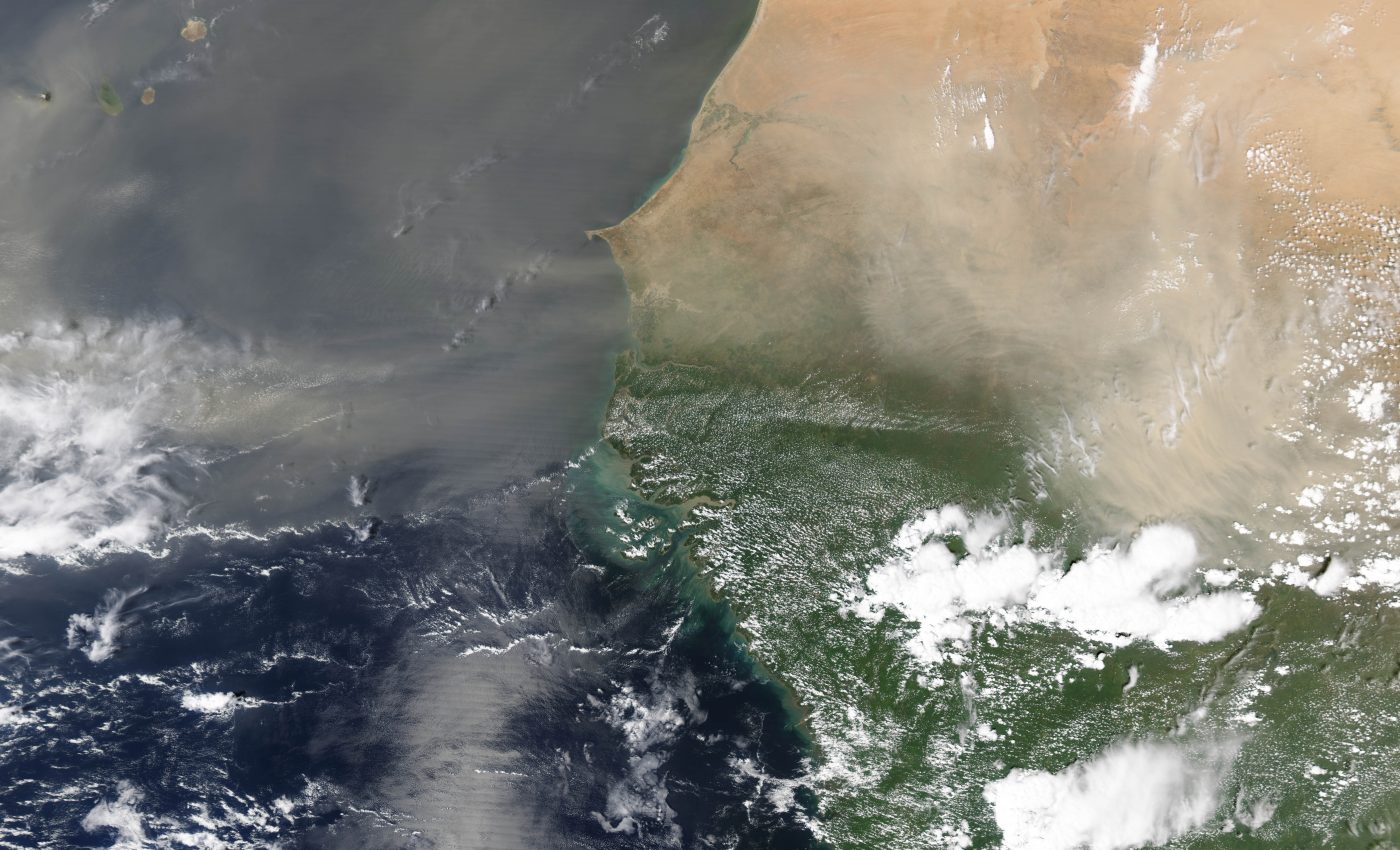 This true-color image shows a large cloud of Saharan Desert dust (tan pixels) blowing westward over Niger, Mali, and Mauritania in northwestern Africa. The dust can also be seen extending westward over the Atlantic ocean in this scene. The bright feature in the eastern Atlantic (image bottom center) is sunglint, caused when the Sun’s rays are reflected off the surface of the ocean directly back at the satellite.

This image was acquired on October 11, 2004, by the Moderate Resolution Imaging Spectroradiometer (MODIS) aboard NASA’s Aqua satellite. The high-resolution copy available here is 250 meters per pixel.

West Africa is the westernmost region of Africa. The United Nations defines Western Africa as the 16 countries of Benin, Burkina Faso, Cape Verde, The Gambia, Ghana, Guinea, Guinea-Bissau, Ivory Coast, Liberia, Mali, Mauritania, the Niger, Nigeria, Senegal, Sierra Leone and Togo, as well as the United Kingdom Overseas Territory of Saint Helena, Ascension and Tristan da Cunha. The population of West Africa is estimated at about 381 million  people as of 2018, and at 381,981,000 as of 2017, of which 189,672,000 are female and 192,309,000 male. Studies of human mitochondrial DNA suggest that all humans share common ancestors from Africa, originated in the southwestern regions near the coastal border of Namibia and Angola at the approximate coordinates 12.5° E, 17.5°S with a divergence in the migration path around 37.5°E, 22.5°N near the Red Sea.

A particular haplogroup of DNA, haplogroup L2, evolved between 87,000 and 107,000 years ago orapprox. 90,000 YBP. Its age and widespread distribution and diversity across the continent makes its exact origin point within Africa difficult to trace with any confidence,however an origin for several L2 groups in West or Central Africa seems likely, with the highest diversity in West Africa. Most of its subclades are largely confined to West and western-Central Africa.