Dust Over the Four Corners Region 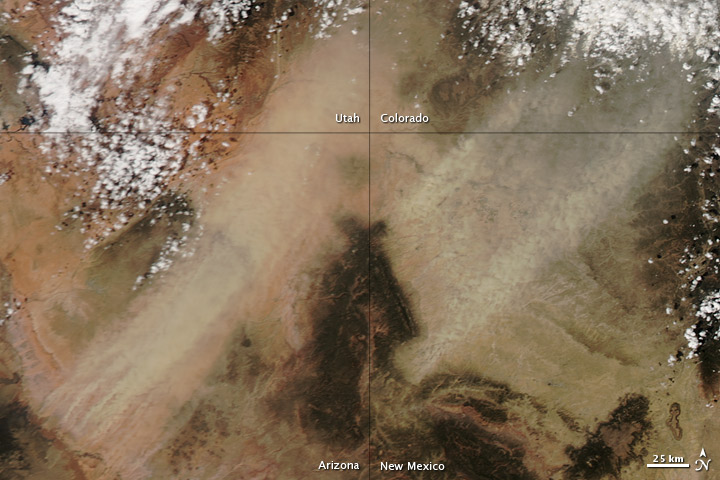 Dust Over the Four Corners Region. Dust plumes blew over parts of Arizona, New Mexico, Colorado, and Utah on April 16, 2013. The dust plumes arose in two large clusters, one in northeastern Arizona, and the other in northwestern New Mexico. The dust plumes grew in both size and intensity through the day. The plumes blew toward the northeast, possibly stirring additional particles as they moved.
The Moderate Resolution Imaging Spectroradiometer (MODIS) on NASA’s Terra satellite captured the top image in the morning, and MODIS on NASA’s Aqua satellite captured the bottom image in the afternoon. Both images are natural color.
On April 16, the U.S. Drought Monitor reported that, with the exception of a small region in central Arizona, abnormally dry or drought conditions prevailed throughout Arizona, New Mexico, Colorado, and Utah, with an area of extreme drought stretching across the Arizona-New Mexico border. Many of the dust plumes visible in these images arose in or near that area of extreme drought. The Four Corners is a region of the United States consisting of the southwestern corner of Colorado, southeastern corner of Utah, northeastern corner of Arizona, and northwestern corner of New Mexico. The Four Corners area is named after the quadripoint at the intersection of approximately 37° north latitude with 109° 03′ west longitude, where the boundaries of the four states meet, and are marked by the Four Corners Monument. It is the only location in the United States where four states meet. Most of the Four Corners region belongs to semi-autonomous Native American nations, the largest of which is the Navajo Nation, followed by Hopi, Ute, and Zuni tribal reserves and nations. The Four Corners region is part of a larger region known as the Colorado Plateau and is mostly rural, rugged, and arid. In addition to the monument, commonly visited areas within Four Corners include Monument Valley, Mesa Verde National Park, Chaco Canyon, Canyons of the Ancients National Monument and Canyon de Chelly National Monument. The most populous city in the Four Corners region is Farmington, New Mexico, followed by Durango, Colorado.