Dust storm in the Gobi Desert 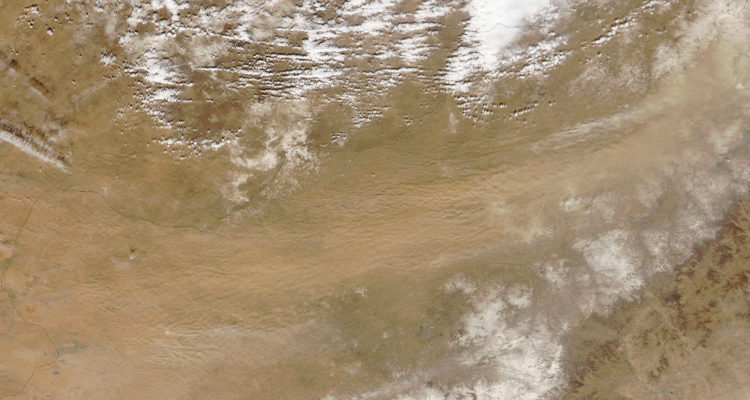 A billowing river dust poured from the Gobi Desert ahead of a storm system in mid-March 2016, covering the landscape from eastern Mongolia through western China. The Moderate Resolution Imaging Spectroradiometer (MODIS) aboard NASA’s Aqua satellite acquired this true-color image on March 17.

The Gobi Desert stretches over parts of southern Mongolia and northern China. It is one of the world’s most prolific dust-producing regions. Dust storms from the desert can occur at any time of the year, but are more frequent in March through April.

The Gobi measures over 1,600 km (1,000 mi) from southwest to northeast and 800 km (500 mi) from north to south. The desert is widest in the west, along the line joining the Lake Bosten and the Lop Nor (87°–89° east).It occupies an arc of land 1,295,000 km2 (500,000 sq mi) in area as of 2007; it is the sixth-largest desert in the world and Asia’s 2nd largest. Much of the Gobi is not sandy but has exposed bare rock.
In its broadest definition, the Gobi includes the long stretch of desert extending from the foot of the Pamirs (77° east) to the Greater Khingan Mountains, 116°-118° east, on the border of Manchuria; and from the foothills of the Altay, Sayan, and Yablonoi mountain ranges on the north to the Kunlun, Altyn-Tagh, and Qilian mountain ranges, which form the northern edges of the Tibetan Plateau, on the south.