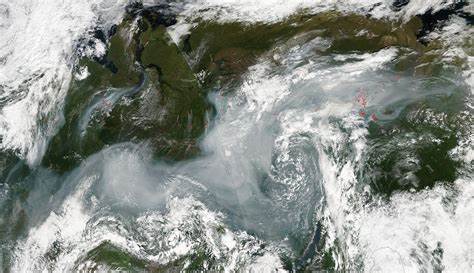 Intense fires continued to burn in the boreal forests of eastern Siberia on August 1, 2010. The fires are outlined in red in this image, acquired by the Moderate Resolution Imaging Spectroradiometer (MODIS) on NASA’s Aqua satellite. The fires span the borders of Russia’s Chukotskiy, Magadan, and Koryakskiy provinces.

Burning in coniferous (evergreen) forests, the fires blanketed northeastern Siberia with thick brown smoke. The smoke hugs the ground near the fires, filling valleys, and soars over clouds farther away from the flames. On August 1, the smoke flowed north from the fires and over the Arctic Ocean. A wide view of the Arctic shows the smoke crossing the Bering Strait and clouding skies over northern Alaska.

Siberia (/saɪˈbɪəriə/; Russian: Сибирь, tr. Sibír’, IPA: [sʲɪˈbʲirʲ] (listen)) is an extensive geographical region spanning much of Eurasia and North Asia. Siberia has historically been a part of modern Russia since the 17th century.

The territory of Siberia extends eastwards from the Ural Mountains to the watershed between the Pacific and Arctic drainage basins. The Yenisei River conditionally divides Siberia into two parts, Western and Eastern. Siberia stretches southwards from the Arctic Ocean to the hills of north-central Kazakhstan and to the national borders of Mongolia and China.

With an area of 13.1 million square kilometres (5,100,000 sq mi), Siberia accounts for 77% of Russia’s land area, but it is home to approximately 36 million people—27% of the country’s population. This is equivalent to an average population density of about 3 inhabitants per square kilometre (7.8/sq mi) (approximately equal to that of Australia), making Siberia one of the most sparsely populated regions on Earth. If it were a country by itself, it would still be the largest country in area, but in population it would be the world’s 35th-largest and Asia’s 14th-largest.