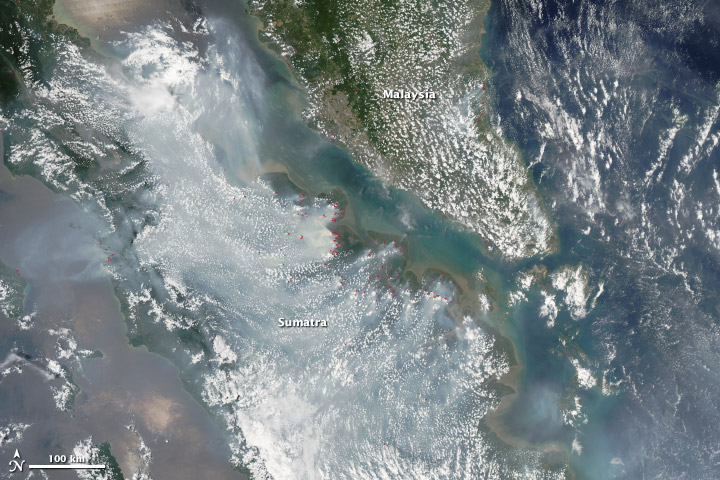 Fire activity has flared up once again on the island of Sumatra in Indonesia, after being relatively quiet over the past month. This image of active fires (marked in yellow) was captured by the Moderate Resolution Imaging Spectroradiometer (MODIS) on the Aqua satellite on June 15, 2004, several weeks after the first image in the series was captured. Fires are concentrated in the north-central part of the island, their smoke mingling with clouds to the north and east.

Sumatra is an elongated landmass spanning a diagonal northwest-southeast axis. The Indian Ocean borders the west, northwest, and southwest coasts of Sumatra with the island chain of Simeulue, Nias and Mentawai off the western coast. In the northeast the narrow Strait of Malacca separates the island from the Malay Peninsula, which is an extension of the Eurasian continent. In the southeast the narrow Sunda Strait, containing the Krakatoa Archipelago, separates Sumatra from Java. The northern tip of Sumatra borders the Andaman Islands, while off the southeastern coast lie the islands of Bangka and Belitung, Karimata Strait and the Java Sea. The Bukit Barisan mountains, which contain several active volcanoes, form the backbone of the island, while the northeastern area contains large plains and lowlands with swamps, mangrove forest and complex river systems.

Credit: Image by Jesse Allen, based on data from the MODIS Rapid Response Team at NASA Goddard Space Flight Center.