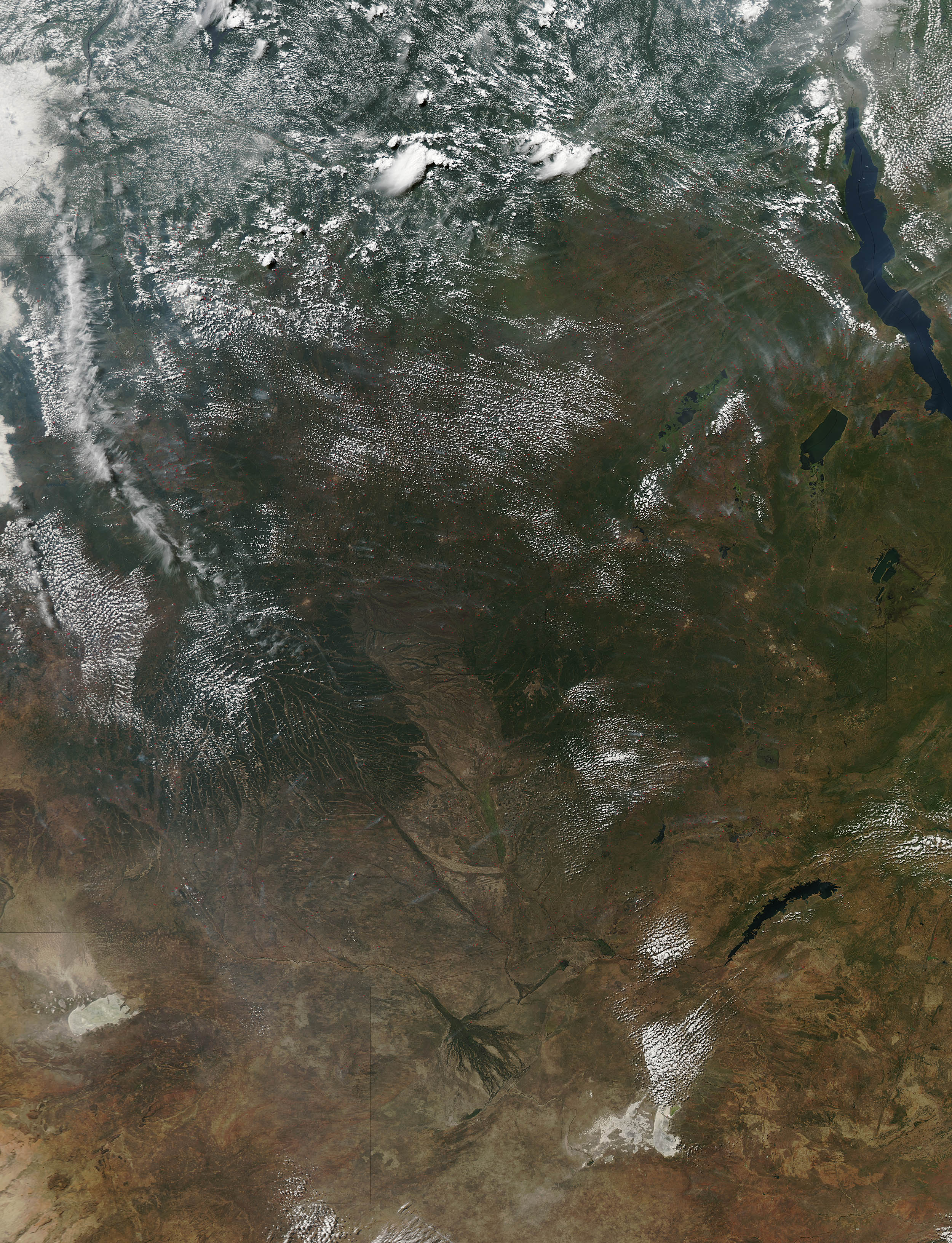 Fires Near Lake Mweru. The Moderate Resolution Imaging Spectroradiometer (MODIS) on NASA’s Aqua satellite acquired this image of dozens of fires burning in the Democratic Republic of the Congo near Lake Mweru on June 10, 2015.

The widespread nature of the fires, their location (generally located away from forests, which appear deeper green), and the time of year suggest that these fires were set intentionally for agricultural purposes. Though not immediately hazardous, such large-scale burning can have a strong impact on weather, climate, human health, and natural resources.

Lake Mweru (also spelled Mwelu, Mwero) is a freshwater lake on the longest arm of Africa’s second-longest river, the Congo. Located on the border between Zambia and Democratic Republic of the Congo, it makes up 110 km of the total length of the Congo, lying between its Luapula River (upstream) and Luvua River (downstream) segments.

Mweru means ‘lake’ in a number of Bantu languages, so it is often referred to as just ‘Mweru’Mweru is mainly fed by the Luapula River, which comes in through swamps from the south, and the Kalungwishi River from the east. At its north end the lake is drained by the Luvua River, which flows in a northwesterly direction to join the Lualaba River and thence to the Congo. It is the second-largest lake in the Congo’s drainage basin and is located 150 km west of the southern end of the largest, Lake Tanganyika.

The Luapula forms a swampy delta almost as wide as the southern end of the lake. In a number of respects the lower river and lake can be treated as one entity. For a lake in a region with pronounced wet and dry seasons, Mweru does not change much in level and area. The annual fluctuation in level is 1.7m, with seasonal highs in May and lows in January. This is partly because the Luapula drains out of the Bangweulu Swamps and floodplain which tend to regulate the water flow, absorbing the annual flood and releasing it slowly, and partly because Mweru’s outlet, the Luvua, drops quickly and flows swiftly, without vegetation to block it. A rise in Mweru is quickly offset by a faster flow down the Luvua.