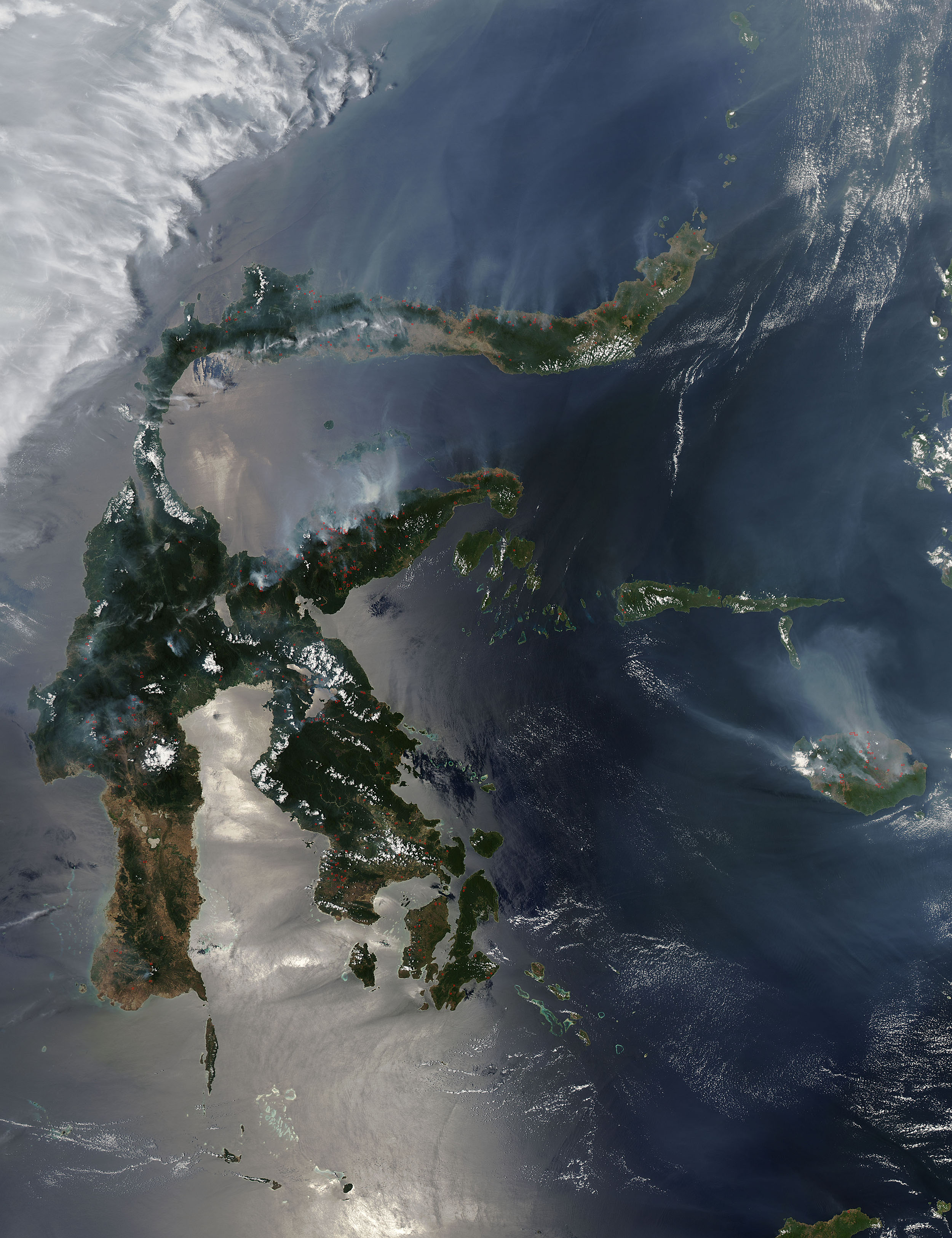 Fires continued to blaze across Indonesia in mid-October 2015 and continued to pump thick smoke across the region, despite multi-national efforts to douse the flames. The Moderate Resolution Imaging Spectroradiometer (MODIS) aboard NASA’s Aqua satellite captured this true-color image of fires and smoke on Sulawesi, Indonesia on October 18.

According to ABC News, two amphibious planes leased by Indonesia’s government and sent by Russia’s Emergency ministry arrived in Indonesia on October 21. Capable of drawing 3,500 gallons (13,250 liters) of water from an open source (river or sea) in a matter of seconds, they join ranks to aid the fight along with assets and personnel from Singapore, Malaysia, Australia, and Japan.

Fires in Indonesia are extremely difficult to extinguish, primarily due to the peat-rich soil of the region. Peat is a mixture of partly decayed plant material formed in wetlands, such as found along the coasts of Borneo, Sumatra and Sulawesi. Farmers in the region practice slash-and-burn agriculture and use fire to clear rainforest to clear the way for crops and pastureland. In Indonesia, the crops are typically palm oil and acacia pulp.

The deliberately-set agricultural fires can ignite peatlands, and once peat ignites, the fire easily escapes by smoldering in underground peat stores – sometimes for long periods. The fires can smolder for months, only to reignite into open flames when they are exposed to oxygen-rich air near the surface. Such fires can often only be doused in this region when firefighters not only have adequate equipment – but also the help of the very wet rainy season.

The fires in Indonesia have been burning for months already this year and seem to be expanding. According to the Xinhua news agency, the spokesman of the Indonesian national disaster management agency reported 801 hot spots on Sulawesi Island on October 19, along with 224 in Papua, Maluku Island and East and West Nusa Tenggara. They also reported that the total number of satellite-detected hotspots in the whole country on that date was 1,545, including Sumatra and Borneo Islands. The report said, “burning during land clearing for new plantation is blamed for the fire in Sulawesi Island.”