Flooding in India and Bangladesh 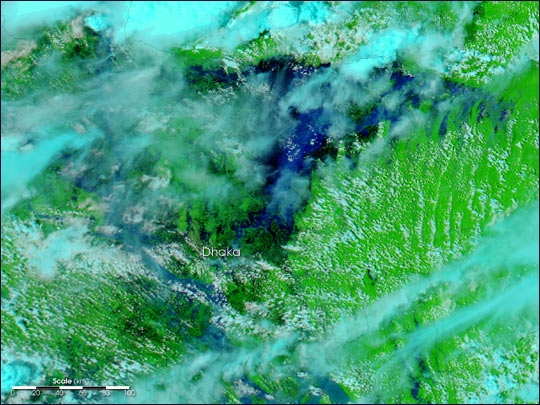 Floods along the Brahmaputra River and its tributaries affected residents of eastern India and Bangladesh in late August 2011. The Times of India reported that sudden swelling of Brahmaputra tributaries inundated villages and left thousands homeless in Assam.

The Moderate Resolution Imaging Spectroradiometer (MODIS) on NASA’s Aqua satellite acquired these images on August 20, 2011 (top), and May 28, 2011 (bottom). Both images use a combination of visible and infrared light to increase contrast between water and land. Vegetation is green and clouds are pale blue-green. Water appears in varying shades of blue, and it is silvery blue where sunlight reflects off the water surface.

Rainy season in this part of the world typically begins in June. The image from late May shows the region before heavy rains have begun. The image from late August shows a transformed landscape. The Brahmaputra River flows through braided channels in eastern India and Bangladesh. By late August, water in the channels has merged, especially in Bangladesh. Meanwhile, in eastern India (image upper right), tributaries to the Brahmaputra have swelled conspicuously. Bangladesh is prone to flooding due to being situated on the Brahmaputra River Delta and the many distributaries flowing into the Bay of Bengal. Due to being part of such a basin and being less than 5 metres above mean sea level, Bangladesh faces the cumulative effects of floods due to water flashing from nearby hills, the accumulation of the inflow of water from upstream catchments, and locally heavy rainfall enhanced by drainage congestion. Coastal flooding, combined with the bursting of river banks is common, and severely affects the landscape and society of Bangladesh. 80% of Bangladesh is floodplain, and it has an extensive sea coastline, rendering the nation very much at risk of periodic widespread damage. Whilst more permanent defenses, strengthened with reinforced concrete, are being built, many embankments are composed purely of soil and turf and made by local.