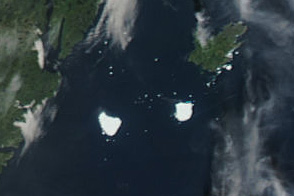 Fragments of the Petermann Ice Island-A (PII-A) continued drifting off the coast of Newfoundland on August 22, 2011, after the ice island split in two. Almost two hours after the Moderate Resolution Imaging Spectroradiometer (MODIS) on NASA’s Terra satellite observed the ice island fragments, MODIS on NASA’s Aqua satellite took this picture.

The island was discovered by a German expedition of 1873-74, who named it after geographer August Petermann. The French Antarctic Expedition of 1908-10 wintered over aboard ship in a cove on the southeast side of the island, named Port Circumcision because it was spotted 1 January 1909, the traditional day for the Feast of the Circumcision.

Huts built by the expedition are gone, although a cairn remains, along with a refuge hut built by Argentina in 1955, and a cross commemorating three members of the British Antarctic Survey who died in a 1982 attempt to cross the sea ice from Petermann to Faraday Station.