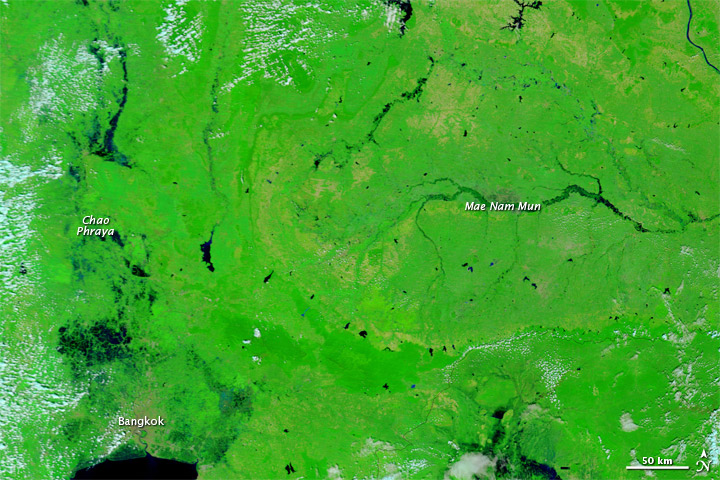 Pale blue marks the location of floods in northern Thailand in this false-color Moderate Resolution Imaging Spectroradiometer (MODIS) image acquired on May 23, 2004, by the Aqua satellite. The floods came on the heels of heavy rains, which gave an early start to the rainy season on May 19. According to news reports, 6,019 people were affected by floods and mudslides throughout the country. Six people were killed, and 79 houses were completely destroyed.

The Thai government is blaming the floods on illegal logging. Forested land absorbs more water than cleared land because the trees influence how water falls and is absorbed. Once the trees are cleared, water that would have been absorbed runs off, creating more frequent flash floods. Deforestation also leads to landslides because the land is no longer anchored by trees.

Vegetation in these images is bright green, and bare earth is pink and tan. Clouds are light blue. The large image shows widespread flooding south of the flooded area shown here at a resolution of 250 meters per pixel. Northern Thailand is geographically characterised by several mountain ranges, which continue from the Shan Hills in bordering Myanmar to Laos, and the river valleys which cut through them. Though like most of Thailand, it has a tropical savanna climate, its relatively high elevation and latitude contribute to more pronounced seasonal temperature variation, with cooler winters than the other regions. Historically it is related to the Lanna Kingdom and its culture.