The Great Salt Lake is drying up and shrinking fast • Earth.com

The Great Salt Lake is drying up and shrinking fast 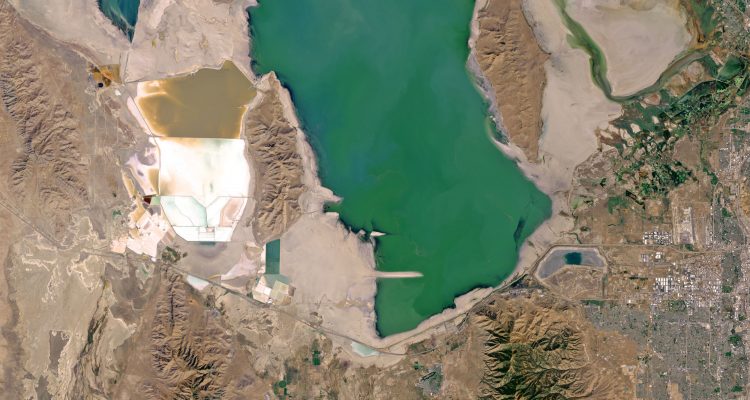 The Great Salt Lake is the second-largest body of water in the United States. Changes in nature and climate change are causing the magnificent terminal basin to dry up and shrink.

The Great Salt Lake is the sole recipient of water from streams and rivers with no other outlet than evaporation. Salts and minerals concentrate in the lake to become five times saltier than the ocean, which provides the perfect ecosystem for more than 250 species of migratory birds who feast on the thriving brine shrimp and fly population.

The millions of birds and shrimp – and the people who harvest the shrimp and extract salts and recreational fun from the lake – have a big problem. Over the past 150 years humans have been taking more water out of Salt Lake than what has been flowing into it. They divert this water for farming, industry and consumption, and now the lake’s natural reserves are drying up. Only this month, the Great Salt Lake reached its lowest ever recorded level: 1277.5 meters.

Five years of drought have contributed to the recent drop in the water line, as have higher-than-normal temperatures.

The volume of water in the Great Salt Lake has shrunk by 48 percent and the lake level has fallen 3.4 meters since 1847.

The two Landsat satellite images show recent changes in the Farmington Bay basin of Great Salt Lake. The Thematic Mapper on Landsat 5 acquired the first image on September 11, 2011; the second image was captured by the Operational Land Imager (OLI) on Landsat 8 on September 20, 2016.

Scientists’ estimate more than three-quarters of the lake bed is now exposed in Farmington Bay. Salt Lake City (lower right) and its northern suburbs stretch around the east side of the lake.

“Farmington Bay has been nearly desiccated as the result of the combined effects of drought and water withdrawals from the rivers feeding the lake,” said Wayne Wurtsbaugh, who studies watershed sciences at Utah State University. “Farmington Bay is an immensely important feeding area for migratory shorebirds and waterfowl. Even at the low level we have now, it is still important, but the greatly reduced size has diminished its value.”

“A wildcard for the fate of the lake is what global climate change may do to the basin,” said Wurtsbaugh. “Warmer air temperatures are projected to lower runoff, but our data shown in the white paper suggests there haven’t been climate change effects on the runoff yet.”— 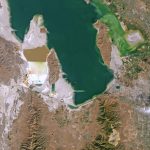