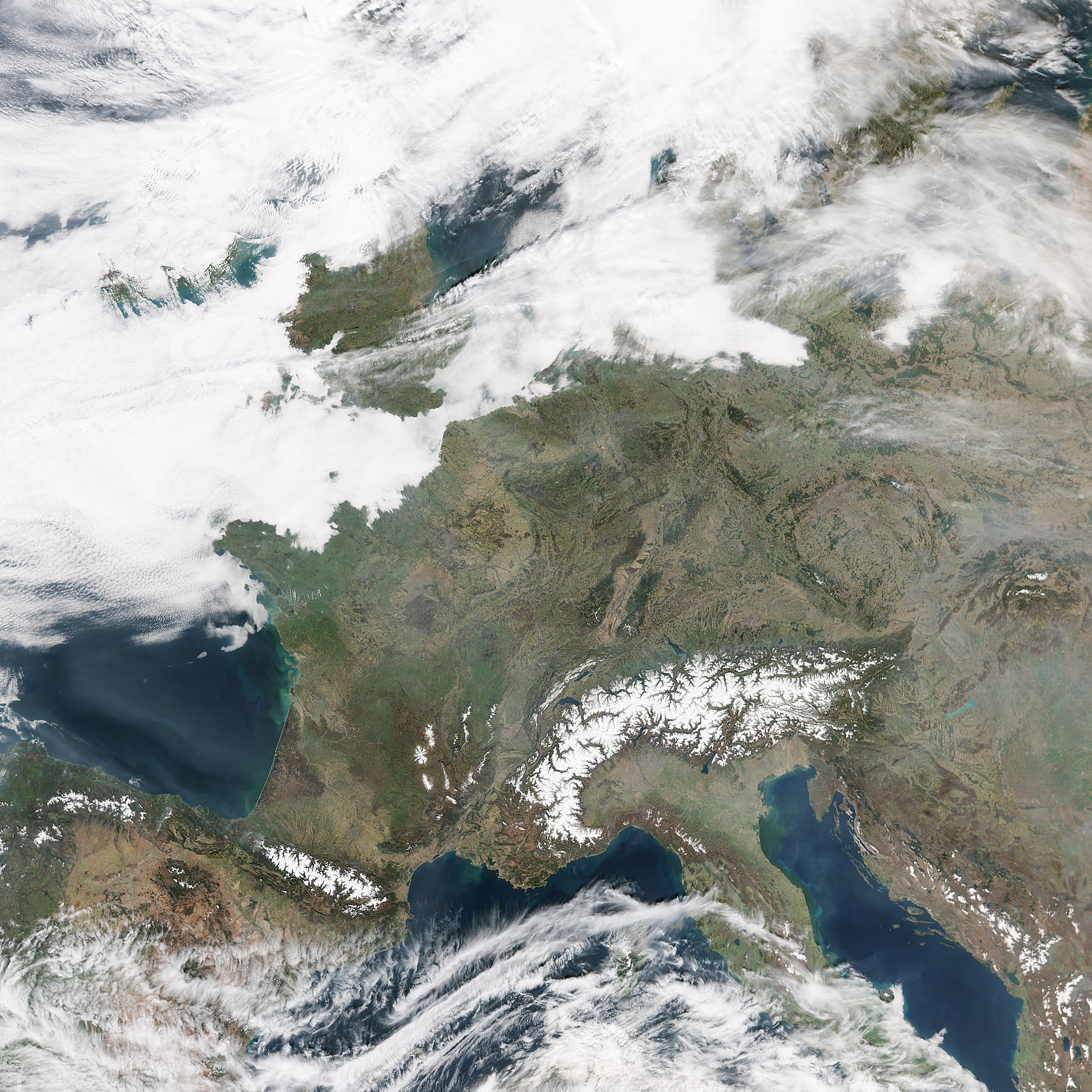 Haze Over France. In March 2014, stagnant air over Europe temporarily turned the “City of Light” into a city of haze. Paris faced its most severe air pollution episode in years as levels of fine particulate matter (PM2.5) peaked at 185 micrograms per cubic meter on March 14, 2014. That is about ten times the average recorded by a PM2.5 monitor in Bobigny, France, according to the European Environment Agency. The World Health Organization considers PM2.5 levels to be safe when they are below 25 micrograms per cubic meter.

The natural-color image above, showing haze over France, was captured by the Visible Infrared Imaging Radiometer Suite (VIIRS) on the Suomi NPP satellite on March 14, 2014. The pollution, which appears gray, is most visible just south of the low clouds over the English Channel. Although a number of pollutants can have a negative effect on human health, PM2.5 has the most impact on visibility in natural-color satellite images.

Temperatures normally decline with altitude, but meteorological conditions across Europe in mid-March set up a situation in which the opposite occurred. For a few days, temperatures increased with altitude, a circumstance known as a temperature inversion. As a result, the layer of warm air functioned like a lid, trapping pollutants near the ground and preventing winds from dispersing them.

“Europe has been under a persistent high-pressure system that brought fair weather and clear skies to much of the continent,” explained Bryan Duncan, an air quality expert at NASA’s Goddard Space Flight Center and deputy project scientist for the Aura satellite. “We had the perfect setup for stable air and a pollution event because it was very warm during the afternoons but quite cool at night.” Duncan passed through Paris at the height of the pollution outbreak while traveling from a conference in the Netherlands.

Although high for Europe, the severity of the pollution paled in comparison to recent outbreaks in Asia. For instance, during January 2013, air pollution levels in Beijing soared above 800 micrograms per meter, causing a thick pall of gray to completely obscure the landscape in satellite imagery. A bad air quality day in Europe looks fairly clear in comparison.

“When looking at satellite imagery like this, remember that the satellite shows the vertical column concentration of pollution, not just the surface concentration,” explained Rudolf Husar, an atmospheric scientist at Washington University. “In this case, the pollution was confined to a shallow layer that was less than 500 meters (1,600 feet) thick, so the haze appears light.”

Despite this recent outbreak, longer-term trends show the air over France has grown cleaner in recent decades. Emissions of pollutants that produce PM2.5 pollution have declined by about 50 percent between 1990 and 2011, according to a report by the European Environment Agency. In France, the energy sector accounts for about 57 percent of PM2.5 pollution, transportation for 20 percent, industry for 16 percent, and agriculture for 4 percent.

To combat the haze, French authorities took the rare step of temporarily barring half of all vehicles from the road and making public transportation systems free. The last time France took similar steps was 1997, according to the BBC.